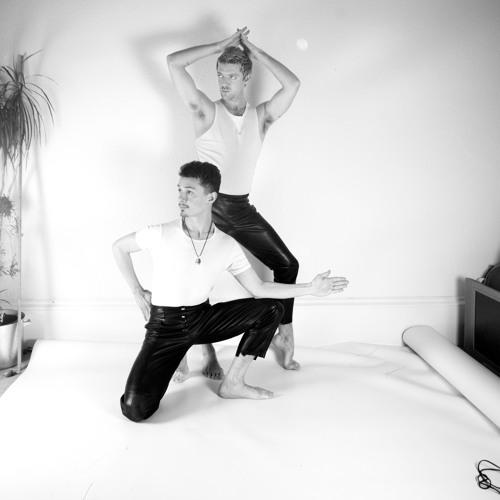 Total Leatherette is a Psych-Vogue project which informs experimental compositions through the experience of the post-industrial cosmopol, anxiety-stricken cause and effect of sensitive being – serving as a fever dream to those most likely to fail but encouraging to bask in that righteous climax.

Our purpose is to prove a queer identity is no more true and concrete a trajectory than questioning the cosmic hilarity of our fate as a collective people, drawn by higher minds feeling as though their hirchy diminishes the sole purpose of participation and feeling.

Hopelessness, conflicting emotion, Ego beyond and before – a self-aware, self-deprecating pride flight, aiming to raise awareness and bring experience of the confusion and incapable safety we have on our minds, hearts and souls within the lines of spectacle and modesty.

“Glaswegian duo Total Leatherette excel at unease. Listening to their second album For The Climax Of The Night induces the feeling of being stalked through unfamiliar streets. The album is built on rising anxiety, driving belligerently onwards towards the darkest dancefloor you never dreamed of, climaxing with throbbing machine music. Reverberating, irregular beats from the drum machine are layered with creeping vocals that you can’t quite catch but paranoiacally understand. This is dark disco, mutated EBM, queer industrial music that deserves its face wrapped in latex.”