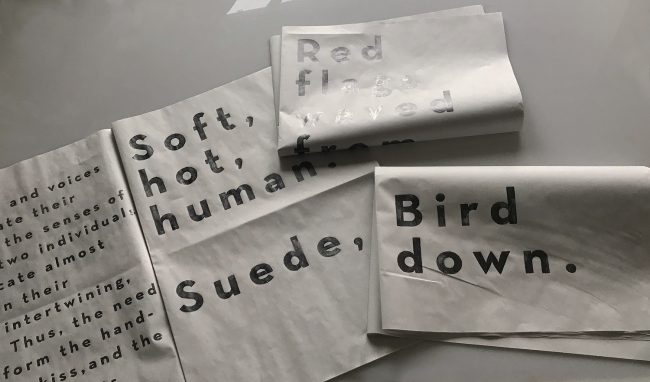 In a new, ongoing series of works, Mariella Louise Otto is exploring a manifesto entitled ‘Tactilism’ from 1921, written by the poet, futurist and fascist F. T. Marinetti.

A video work is to be developed during the fall/winter of 2019-2020, in collaboration with Daniel Wade, an experienced masseur and spoken word artist. Wade will perform a speech for the camera, while also re-enacting the movements he uses in massage, although here on an imaginary body – merging a deconstruction of the manifesto with something close to choreography. The imagery in the video displays the masseur in a black box, behind him and the massage table is a white curtain – creating a small stage or spotlight. As he speaks, the vocal range varies in temperament, moving from soft to aggressive, joyous to desperate, in a rhythm similar to spoken word. The voice changes in accordance to the intensity of the movements performed with the hands, indicating a causality between the two. Elements of the filmset, as well as fragments of the script, is seen in the image – revealing a level of staging or rehearsal.

Besides elaborating on touch as a sense, the manifesto also brings in notions of cleanliness and purity – subjects present in various western treatment rituals, as well as in fascist ideology. The work wishes to question the text by means of its deconstruction, while also making it visible in the context of current political states, imagined futures, polarisations and the experience of a disintegrating body or physicality.

The second part of the project is a publication entitled “Devour some, spit some!”, which goes further into research material from the futurist movement – combining it with contemporary philosophy and Ottossons own writing.