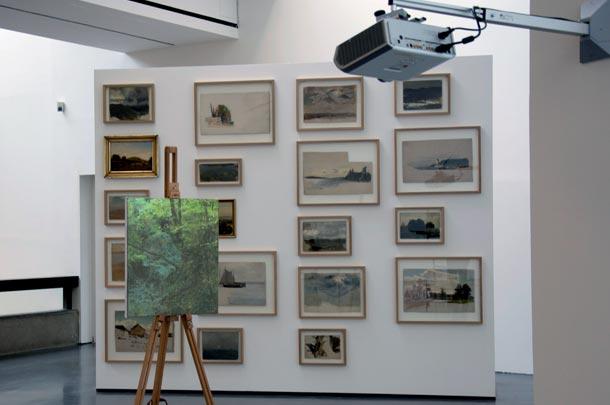 “The true journey lies not in seeing new landscapes but in having new eyes.” Marcel Proust

In 1856, the Neanderthal in the Rhine valley, western Germany, rose to world-notoriety because of the discovery of the so-call Neanderthal man. Until the mid 19th century, the area was still a 700 meters long and deep and very narrow canyon between rocks and beech woods, with a few caves and a couple of waterfalls. In the mid 19h century, the local farmers started to quarry limestone here and the canyon was widened. It was at such a widening that a group of quarrymen found a skeleton in the Feldhof Cave. Nowadays the canyon has disappeared and there is a museum at the site, the Neanderthal Museum.

The German artist Johan Wilhelm Schirmer (1807–1863) was one of the initiators of the first landscape painting class at the Art Academy in Düsseldorf, and as its first professor of landscape painting he worked out a pedagogic. Together with his mentor, Carl Friedrich Lessing (1808–1880), J. W. Schirmer had done a number of delicately detailed paintings of the

vegetation, rocks and waterfalls in the Neanderthal. These wonderful works were also an important instrument in Schirmer’s teaching of landscape painting at “Die Düsseldorfer Malerschule,” while they made up a kind of alphabet that the students learned by copying. They also trekked together to Neanderthal where they made their own sketches according to Schirmer’s directions.

These experiences were brought to bear on other landscapes than the Rhine valley, for example by artists such as Markus Larsson (1825–1864) in Sweden, Albert Bierstadt (1830–1902) in the USA, and Ivan Schischkin (1832–1898) in Russia, all portraying their national landscapes. The Norwegian Hans Fredrik Gude (1825–1903), who was also taught by Schirmer, replaced him as professor. With Gude as a professor a large number of Scandinavian artists were attracted to study in the city.