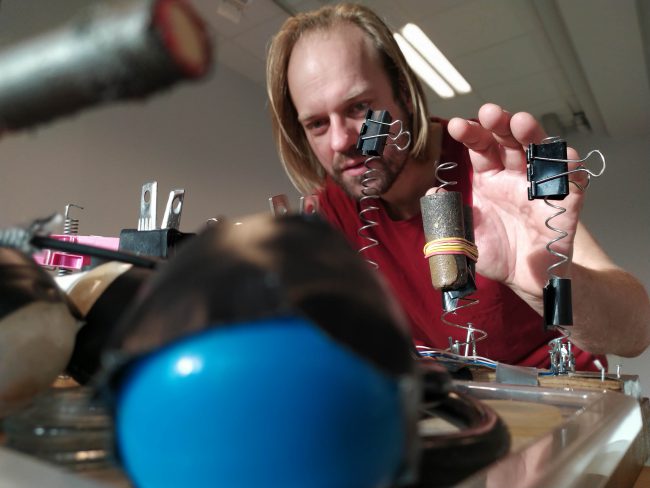 Nicklas Lundberg will through this project explore and research interaction with sound through interfaces that use physical phenomena as the vehicle for generating content while the human performer remains the agent in terms of form. Many inspiring questions arise when using an environment like this: about the nature of musical gestures, the correlation between agent and sound; topics that are as important today as they have been in the past, not the least in the history of electroacoustic and acousmatic music and theory.

For the research an array of objects will be built which all offers in some way a response of autonomous pattern generation. The patterns that arise will be translated to the digital domain and linked with sound generation techniques utilizing the visual programming language PureData. This will be the environment that is used for the research.

The objects will be built of repurposed materials, which is a thematic link to the idea of using forces that are there free for all to use. Hence there is a sculptural element to the project, however the focus at IAC will be the sounding features.

The research at IAC will focus on compositional, improvisational, performative possibilities within the given settings and aim to find the given and most suitable expressions that this environment affords from a sonically aesthetic perspective.

There will be a public presentation, form and date to be announced later.

The project is supported by Malmö Stad and Region Skåne.

Nicklas Lundbergs practice is centered around sculptural sound works, often with kinetic and interactive elements. His central themes which he problematize are normality and classification, which he approaches with a primitivistic work ethos. He seeks the highly functional error and delivers his critique of society in this way.

Sonically his works reside in the vicinity of electro acoustic music, while at the same time they are strongly influenced by improvisational music. Visually his works draw inspiration from junk art and the found object traditions, but at the core the selection of objects is a consequence of the interactive design.

He is searching for primitive solutions that utilize free resources, may it be scrap electronics, metal junk, shared knowledge, or physical phenomena such as the pendulum motion. His approach is exploratory and he progresses by an iterative process, making prototype series in different sizes and with different functions. The objects that constitute his works are modular and are often rearranged, exchanged, removed, added, or altered and as such there is no given start or finish, it is an open form in constant flux.

Nicklas Lundberg has studied sound art related subjects at Konstfack, Malmö Music Academy, Uppsala University and Lund University. He has prior to his practice as a sound artist been working as a sound engineer and in-house beat maker in music studios in New York, and he has also a background as a double bass player.

He has recently been composer in residence at Elektronmusikstudion in Stockholm (EMS) and at Inkonst Music Studio. Currently he holds a 3-year residency through Lund City to support his experimental project Sound Sculpture lab.