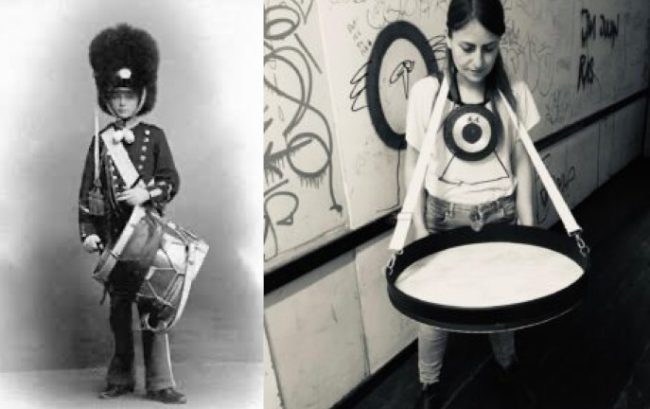 A work-in-progress presentation of the performance ‘Mother Soldier’ by Sandra Boss: Thur, 19 January at 15:00, Red Room. Read more about the event here.

During her Make Sound Residency Sandra will develop the piece ‘Mother Soldier’, a performative and musical work written for a percussion ensemble. As part of her residency, she will invite different artists such as Irene Bianco, Sara Nigard Rosendal, Astrid Hansen Holm, Stina Resting and Carolina Backman to explore how choreography and composition can merge into a single expression.

‘Mother Soldier’ reinterpretates the march drum as a timbral and cultural symbol.

In ‘Mother Soldier’, the heavy march drum has been exchanged with a light frame drum and the cymbal has been replaced with a gong.

Sandra Boss is a Danish-based composer and performer working in the field between instrumental music, electronics, installation and performance. Her works range from orchestra pieces and chamber music to solo performances and installations.

Boss’ work often evolves in the intersection between performance and installation, where machines and instruments become sculptures of sound. She explores the overheard sounds of diverse sound sources both familiar musical instruments but also instruments that was not originally intended for music making such as hearing test machines, bird flutes, therapy instruments, and test equipment.

Sandra Boss has a background in classical music and has later studied electronic music at The Royal Academy of Music in Denmark. In 2019 she finished an artistic-based PhD on sound art at Aarhus University, Denmark, where she explored our conception of hearing through the use of so called “dead technology”, that has been used to optimize hearing.

Boss has been awarded grants from the Danish Art Council, The Danish Composers’ Society and she has received the talent prize from Carl Nielsen & Anne Marie Carl Nielsen Foundation.