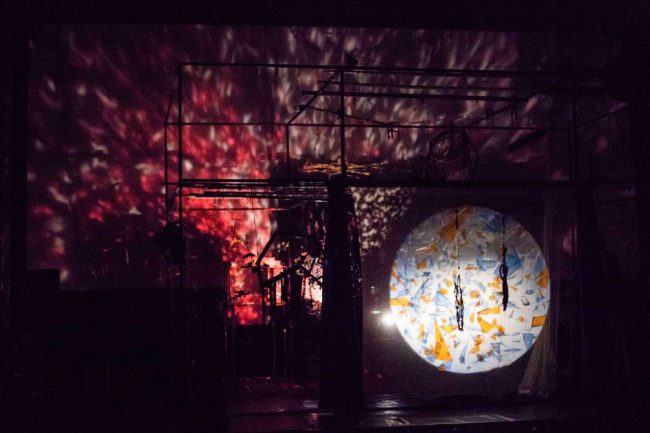 The work of Oona Libens can be situated in the field of media-archaeology and history of the moving image. Her shows are a hybrid between object theatre and cinema. Old techniques are re-used in a refreshing manner in order to illustrate a scientific narrative. She creates a dialogue between old and new media phenomena:  from shadow theatre – as the most primitive manifestation of cinema – to the magic lantern – the first projector, over the (TV-)screen, to Google, and the image- and entertainment society of today. Daily we are engulfed by thousands of images, of which most are being reduced to a small screen. Libens wants to open up the phenomenon of the screen, to give it depth and tactility and expand our experience of it. She makes an entertainment machine that hesitates, stammers and from time to time gives up.

“Pharmakon” means both remedy and poison; a notion having two opposite meanings at the same time. Within media theory it is used as a metaphor for digital media: it can be a useful tool, and a consuming addiction alike – remedy and poison. Throughout the performance Oona Libens will use the idea of medicine as an image for our addiction to entertainment and visual input. “The screen turns into an ever-present non-presence”. The need of intoxication applies also to our use of the screen.

Following on from earlier shows about the universe and the sea, the theme Oona Libens will be working on during the residency at IAC is the human body. She has been researching the history of anatomy and medicine, the way the body has been depicted throughout different ages, but also the way it is often used as a metaphor for society. All those different aspects of this vast topic will be collected in a poetic-scientific amalgam where the border between truth and fantasy is uncertain.

Physical and psychological phenomena will be illustrated using light and shadow, analogue projections and refractions.

The usage of analogue and mechanical techniques is not because of nostalgic reasons. Instead of taking the ‘easy’ road — in fact many of the things happening on stage could be done by a single click on a computer — it is a very conscious choice to make the technique as primitive or intricate as possible. It’s an endeavor to be as uncompromising as possible. This gives a second layer to the performance where the careful movements of the persons on stage become a choreography of itself. The performance will become a comprehensive work, a synesthetic experience, combining many different disciplines and senses.