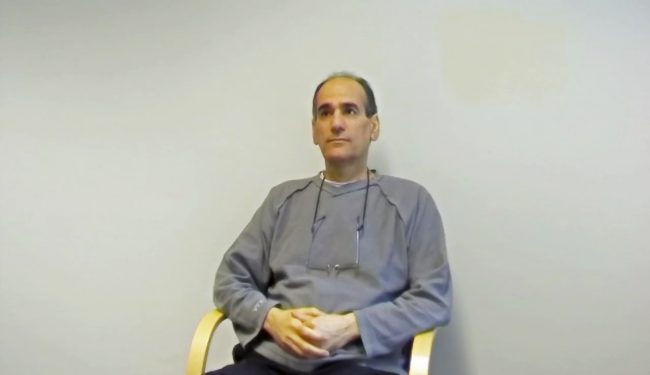 In 2007 artist Kalle Brolin managed to negotiate access to a high-security prison in order to film an interview with smuggler of refugees Amir Heidari. Heidari was a Kurdish guerrilla warrior in Iran, who in 1979 sought refuge in Sweden to receive medical aid. He then spent three decades smuggling refugees into Europe. Heidari claims to have assisted 200 000 people cross borders illegally and says that borders and walls are irrelevant. In the interview with Kalle Brolin, he describes various techniques used to get people through Schengen border controls. In November 2010, three years after the prison interview, Heidari was extradited to Iran where he was imprisoned and tortured. In the performance piece, Kalle Brolin interacts on stage with a filmed portrait of Amir Heidari. The artist describes to the portrait how various parties over the years have tried to access the filmed interview material, in order to influence the meaning and interpretation of it, to create different uses for it. Brolin describes how the police has tried getting access to the material, how it could potentially be used as evidence in a courtroom; or how various producers of documentary films have tried to shape the material into something they would recognize, or something that could please potential financers of documentaries; or how the writer of a libretto for an opera wanted to scan the interview for lines to use; to name a few examples. The artist himself has also struggled with finding a proper artistic form for the filmed interview, and even now, ten years after it was filmed, is still trying to settle it into a final format. Brolin talks about the idea of the migrating image, an image that moves between different contexts and accrues shifting meanings and uses depending on where it is temporarily situated. The artist talks about all of this before the digital portrait of Heidari, who listens, and nods, and refuses to provide any easy answers.