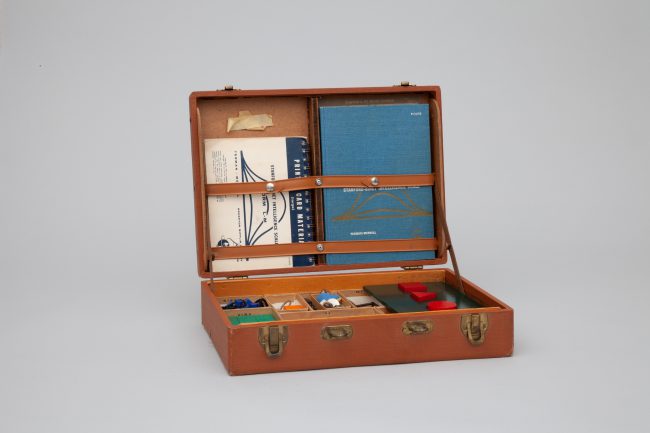 On the Subject of Tests: Rehearsing the Examination
Sasha Bergstrom-Katz

‘On the Subject of Tests’ is a practice-led research project that examines the designs and procedures of psychometric testing. Specifically, it opens up and analyses three twentieth-century-intelligence tests developed to assess children and adults in the United States and beyond. Interwoven in the history of eugenics, education practices, military and prison regimes and the neoliberalisation of workplaces and schools, these intelligence tests deserve an affective and embodied unpacking. Using the IAC’s Black Room as site, artist and researcher Sasha Bergstrom-Katz will record extended rehearsals of the tests’ manuals in a project entitled ‘On the Subject of Tests: Rehearsing the Examination’.

Sasha Bergstrom-Katz is currently a PhD candidate at Birkbeck, University of London in Psychosocial Studies and Film, Media and Cultural Studies. Her work in moving image, sculpture and installation addresses the history of the human sciences and their relationship with culture, media, performance and the production of subjecthood. She holds an MFA in Art and a Graduate Certificate in Critical Theory from the University of California, Irvine, and a BFA in Art from CalArts. She has presented her work in solo and group exhibitions at Human Resources, Los Angeles (2018); Torrence Art Museum, Torrence (2018); In Lieu, Mexico City (2018); AWHRHWAR, Los Angeles (2017); Central Park, Los Angeles (2016); Arturo Bandini, Highland Park (2016); Art Center, Pasadena (2016); and Roberts & Tilton, Culver City (2014).