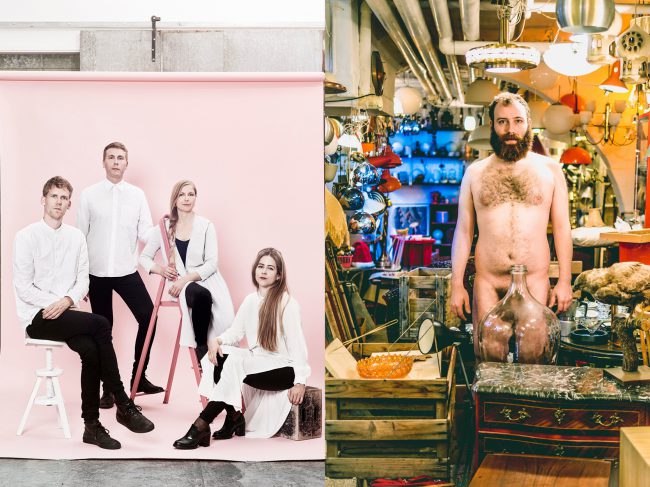 Nya Låtar (Swedish – ’new songs’) is a work of instrumental theatre by composer-performer James Black in collaboration with NJYD quartet. The work will have its roots in the contemporary classical tradition, but will include large elements of performance art, cabaret, and theatre. The piece will last between 20 and 30 minutes, and will be performed by NJYD quartet and the composer themselves. All aspects of the piece – staging, costumes, video, etc. – will be made by the composer and the quartet. The piece will be premiered at Klang Festivalen 2022 in Copenhagen.

The title – ‘new songs’ – is self-explanatory: the piece will consist of three ‘songs’, linked by video interludes. The title is also a play on the Danish ‘nyt lort’ – new shit. The ‘songs’ of the title are more like ‘scenes’ in a theatrical sense, as they will contain elements of staging, acting, and performance beyond the bounds of traditional contemporary classical playing.

The video interludes will overlay a narrative on top of the piece, telling a story featuring Marie Sønderskov (the flute player of NJYD) as the main character. The video interludes will take the form of an improvised sitcom (in the style of British TV series such as The Office, Green wing, etc.) that will be devised by the quartet and the composer during their residency at the IAC.

NJYD is a unique quartet which since their beginning in 2014 have been working on communicating new compositions in a relevant and captivating way. The untraditional crew: flute, saxophone, guitar, percussion creates new sounds and is the foundation for experiments which leads to development of the contemporary music. NJYD is working in frames away from the traditional concert hall and is reaching out to a young audience. The quartet performs both as musicians and organizers of contemporary concerts that include contemporary art and new technology.