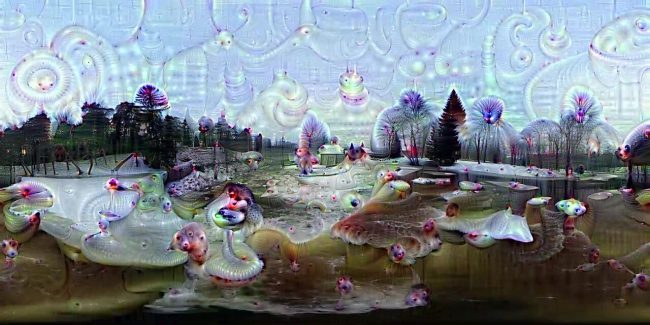 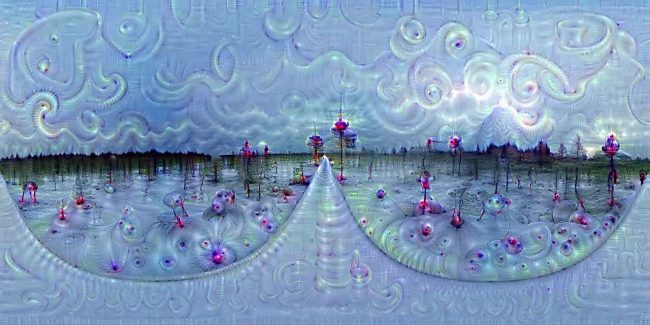 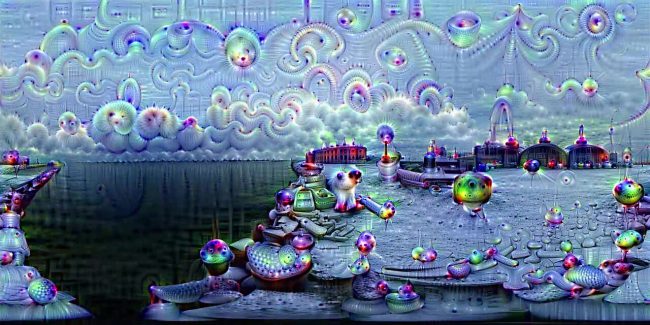 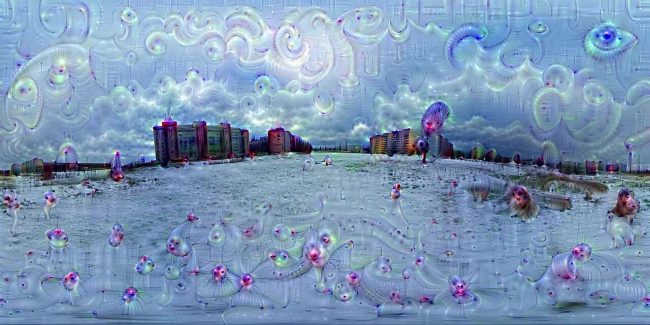 How would you see through the eyes of an artificial intelligence (AI)? Probably in the future we won’t need our eyes to perceive the world any longer, the machine will do it instead of us. Already today a screen is a window to the many realities for us.

By applying the potential of the new immersive media, already today we have an opportunity to perceive our surroundings in a completely different way. ‘Neuronal Landscapes’ allow to dive into a parallel reality and see the environment through the eyes of AI.

The installation applies the potential of virtual reality (VR) and Deep Dream, which generates a neural network simulation inside a machine, to change our point of view of the reality.

‘Neural Landscapes’ takes the viewer to an ancient forest, see coast, rural and urban areas of Estonia. The viewer sees a natural and urban landscapes like a fairy tale or an illusion in a way machines dream about all of that. The artwork is not using artificial spaces, the artists have traveled around the country and recorded the views with a flying drone and two 360-degree cameras. The video material was later re-generated by applying the Deep Dream algorithm. In other words, the project aims to see the landscapes through the eyes of machine.

The artwork was commissioned by Estonian History Museum and is a part of its collection.

‘Neuronal Landscapes’ are part of permanent exhibition “My Free Country” in Estonian History Museum in the room 9, which talks about Estonia after 1000 years.

Varvara & Mar is an artist duo formed by Varvara Guljajeva and Mar Canet in 2009. In their practice they confront social changes and impact of technological era often inspired by the digital age. In addition to that, Varvara & Mar are fascinated by kinetics and participation, which are integral parts of their work.

Artist duo has exhibited their art pieces in a number of international shows and festivals. In 2014 duo has been commission by Google and Barbican for creating a new art piece for Digital Revolution exhibition. In 2015 their public art proposal for Green Square Library and Plaza in Sydney was nominated for the final stage. This year they have completed public art commission in Tallinn and have won 2nd and 3rd prizes for public art in Estonia. Varvara & Mar has exhibited at MAD in New York, FACT in Liverpool, Santa Monica in Barcelona, Barbican in London, Onassis Cultural Centre in Athens, Ars Electronica museum in Linz, Maribor City Gallery in Slovenia, etc.

Varvara (born in Tartu, Estonia), gained her bachelor’s degree in IT from Estonian IT College, master’s degree in digital media from ISNM in Germany and currently is a PhD candidate at the Estonian Academy of Arts in the department of Art and Design.

Mar (born in Barcelona) has two degrees: in art and design from ESDI in Barcelona and in computer game development from University Central Lancashire in UK. He also has gain a master’s degree from Interface Cultures at the University of Art and Design Linz. In addition to that, Mar is a co-founder of Derivart and Lummo.

Varvara and Mar are both members of the Estonian Artists Association.