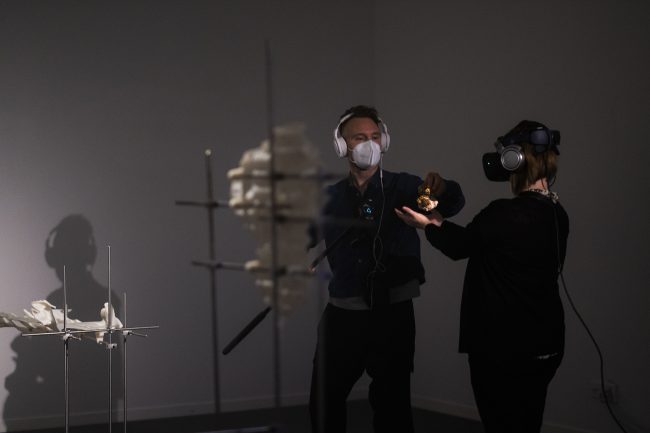 In this series, Lundahl & Seitl join up with British digital studio ScanLAB Projects to combine pointcloud laser scans in VR, with choreography and sculpture. The piece creates a complex matrix which can be experienced as an immersive world in which you, the observer, are embedded, and as a physical display of hyperconnected objects with  unseen realms inaccessible to you.

The room scents include petrichor (water and soil) and fresh, cold ozone. The space makes no divisions between individual artworks, functional objects and tools, the visitor’s own body, or the technology in the room. Without bibliographic references to their origin, objects oscillate between being props, tools or reproductions. Partly obscured by fog, resting on a sound absorbent carpet, objects become ghostlike empty shells, in an abandoned scene at night, where everything is hallucinatory and a shared reality seems inaccessible. The VR technology is here offering a different interface to the room, perhaps more similar to AR, extending beyond visual augmentation, giving it another layer of time and movement, revealing how memory allows for strings of data to pass through matter, across time. From Earth’s deep past as unicellular cyanobacteria, through to its post-anthropocene future, the living is tightly connected with geology: the surface of the earth and matter stored within a lineage of objects and tools: the hammer, the piano, the wireless radio technology of Marconi, and indeed, the faculties of perception of the visitors themselves and the VR device they now wear. Inside it, the virtual is augmented by the analogue touch of the unseen performer and digital code, an abstract cluster of points, leads the way. It also listens and corresponds to touch, vibrations, scents, movement and other sensory additions to conjoin the virtual and physical worlds.

All the above drives a potential narrative which is constantly in negotiation and friction between objective and subjective realities: the visitor’s body and senses are used as an active medium to produce, experience and become aware of the workings of memory and time within the artwork and, indeed, within themselves. Space is distributed between several presences at once, yet traced and felt by the body in every instance.

The physical installation reflects this impact of our ability to organize our perceptions into livable worlds. The digital space in the headsets joins up with physical fragments; a handrail, a part of a sound isolated door, a work bench, all moulded by stereolithographic 3D technique. There are also fossil traces from one of the earliest forms of life; stromatolites. These pieces of rock, with traces of unicellular organisms, remind us how the transition from geology to biological life allowed the earliest form of memory to send a string of data through countless variations of beings, throughout evolution.