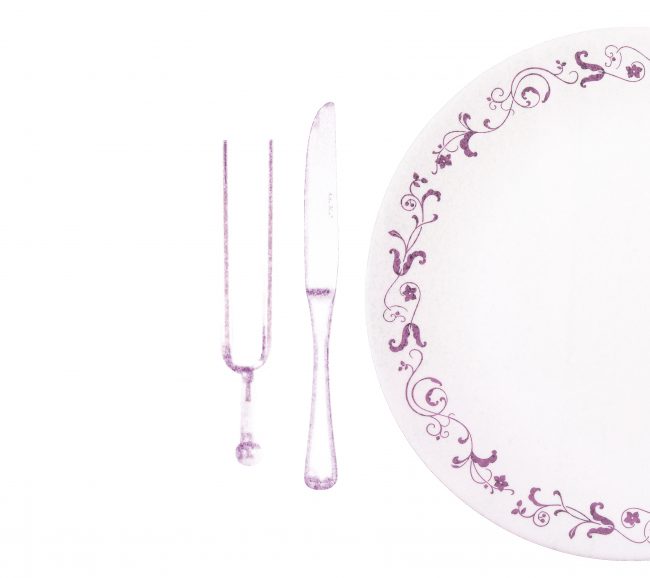 The idea of working around Karen Blixen’s novel Babette’s feast (1958) and its screen adaptation directed by Gabriel Axel in 1987 was conceived in the beginning of 2015. At first composer Fabio Monni tried to create a sound installation to be included in his Still life sound installation series but for lack of time and the commission of other works the idea remained at embryonic stage. Actress Liv Kaastrup Vesterskog had also been thinking about doing a production based on the movie and during the theatre festival Transistor which took place in Malmö in the spring of 2016 the two discovered their common interest and shared their thoughts. These discussions led to the idea of an artistic collaboration and the creation of a staged sound-drama installation.

Monni and Kaastrup Vesterskov had been working with music and drama separately in several individual projects, both sharing a strong interest towards each other’s art and both looking for possible connections to each other’s fields.

At the time of their meetings several questions arose. How can we make text and music work together? How can we create a balance between drama and sound so that no one of the two dominates the other? How much of the text and the music could be left out so that the two still function together, preserving the drama, a sufficiently high amount of interest and still being able to tell a story? How can we relate our work with the past and the time in which the story takes place and how can we connect that to our society? How the society portrayed in the book could be related with our contemporary social behavior and how our inner needs are in conflict with the actual social rules?

These questions brought Liv and Fabio to plan a live sound-drama installation with an actor on the scene as voice over.

The sound installation portrays the soundscape of a group of people sitting around a table and dining together in complete silence. The only audible sounds are the ones of the actual eating (body sounds) and the ones of the used objects such as cutleries etc. but without any dialogue or change of words between the participants. It is the amount of sounds, the intensity of these, the groans of suspicion as well as surprise and appreciation that will clarify the emotional state of the guests and the dramatic situation so to speak. The role of the actress on the scene is to describe a series of only audible situations, leading the imagination of the listeners into the dining room, the people, their weakness and typical behaviors. For this role Liv and Fabio imagined to use a voice-over technique, live. This decision logically comes when thinking: if the protagonists are not visible, then the voice over should be the live performer. It is a subverted way of telling a cinematic story where the only character not supposed to be present or to attend the dinner is the only one that is actually standing in front of the audience.

The live sound installation consists of several scenes that mirror a full course dinner. The actress on stage introduces the guests as you hear they are arriving and ends the show when the dinner is over and the guests leave the place. Between every scene the electronic focuses on one particular sound taken form the dinner and explores its sonic characteristics, spectrum, timber etc. as well as the space surrounding the audience. This shifts between dramatic ‘realistic’ soundscapes and more abstract ‘not human’ ones will be Liv and Fabio’s attempt to create a balance between storytelling and a purely sonic experience.