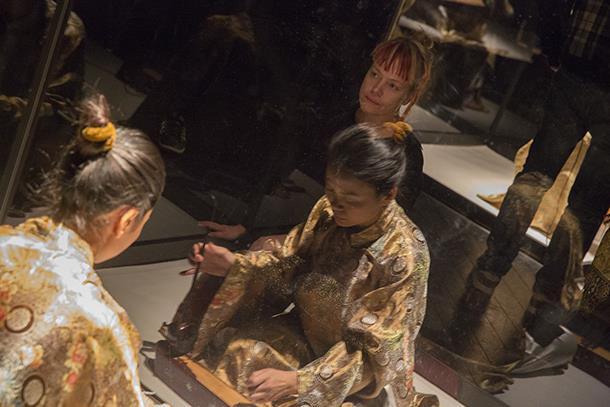 Inside/Outside
on tour in Europe

Inside/Outside is an installation and performance for three choreographed musicians based on a concept by Nguyen Thanh Thuy. The project is now heading off for an international tour starting at Världskulturmuseet in Göteborg, continuing to the well-renowned Audio Art Festval in Krákow and then on to the South East Asian Arts Festival in London, finishing off with a longer show at the Sidney Cooper Gallery in Canterbury.

Adopting a gender perspective on how traditional Vietnamese music is presented in Vietnamese TV shows, the installation depicts the musicians as wax dolls in glass boxes in a dark room. But who are these musicians? They play Asian instruments and wear traditional Vietnamese queen costumes but one of them appears to be a Western man. What is Inside and what is Outside in this self-reflective imagery?

The choreography by Marie Fahlin is based on analysis of gesture in Vietnamese TV-shows. The music, by The Six Tones (Nguyen Thanh Thuy, Ngo Tra My, Stefan Östersjö) and Matt Wright, builds layer upon layer of material from two traditional Vietnamese pieces.