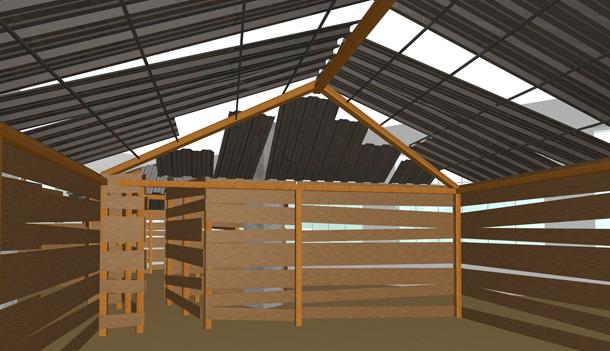 The aim of the course is to expand the notion of space and to use imagination and fiction as a tool for exhibition making as well as discuss the web of connections and knowledge that informs contemporary exhibition making. Following this thread we will expand the discussion to cover the relations between bodies and virtual spaces, perception and physicality.

The second part of the course will take place at IAC, the White room will be an experimental laboratory, where the “imaginary” spaces are transformed, constructed and deconstructed in sessions led by dancer Liz Kinoshita and performance artist Jeremiah Day. Liz Kinoshita will talk about her work with Tino Segal and lead a series of physical exercises. Jeremiah Day will work with choreography and performativity in relation to the imaginary exhibitions that have been created in SketchUp.

Jeremiah Day: is an artist and performer, and is currently pursuing a Doctorate of the Arts in collaboration with the Vrije Universiteit, Amsterdam and the Utrecht Graduate School of Arts. His work has been presented in recent exhibitions at Ludlow 38 in New York, Frac Champagne-Ardenne, and Essays and Observations, Berlin. Day is represented by Ellen de Bruijne Projects in Amsterdam and Arcade, London.

Sonia Dermience: Is a curator and founded Komplot in Brussels in 2002, a curatorial collective concerned with nomadic creative practices with early projects such as ‘Midi Zuid’, ‘Vollevox’ or ‘Architecture of Survival’. Under the name of Catherine Vertige, she conducted extensive research into post ’68 collaborative art practices in Belgium with seminars and two documentary films. In 2009 Komplot founded ‘The Public School Brussels’. Since 2010 Komplot is located in a converted warehouse dedicated to exhibitions, residencies and studios. She is the curator of the coming Copenhagen Art Festival 2015

Liz Kinoshita: Is a dancer and was born in Toronto, Canada and moved to Europe in 2002 to further study and work. Since graduating she has worked with various Belgian companies, such as: ZOO/Thomas Hauert in Accords, You’ve Changed, and MONO, with tg STAN in Nusch and The Tangible, and with choreographer Eleanor Bauer/GoodMove in A Dance For The Newest Age (the triangle piece) and Tentative Assembly (the tent piece).