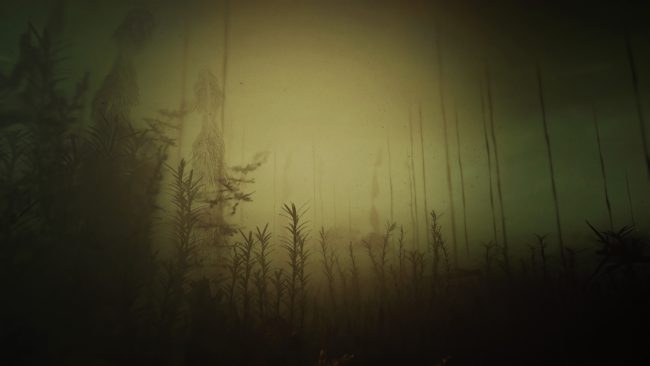 The installation is based on a myth about a man from Thy who used to walk along the beach every night to look for wreckage. Sometimes he seemed a little strange, and one heard him humming melodies the mermaids had supposedly sung for him. Slowly he became more and more ill, and one day he disappeared completely. People thought it was the sea people who had lured him down to their wet home.

“Hush” invites the viewer to tune in to an ancient world that generations of northerners once knew – when man, animals and nature were connected, and nature was animated. The work provides the opportunity to experience a mythological landscape that is brought to life and communicates with the viewer in a three-dimensional universe, where nature and myth are united in a poetic and sensual experience.

Vibeke Bryld (b.1977) is a director and writer living in Copenhagen. She has directed several short documentary and fiction films and holds a bachelor degree in literary studies and philosophy and a master’s degree in documentary from Goldsmiths College, University of London She works in a space between documentary and fiction. Her films have been selected for Berlinale, HotDocs, CPH:DOX, and her first VR work was selected for competition at Venice Film Festival in 2020.

Elin Maria Johansson (b.1979) is a visual artist. Educated at the Royal Academy of Fine Arts, Stockholm. Lives and works in Skåne since 2010. Her works consists of video, animations, objects and sounds. The works form an abstract and metaphorical weave, a suggestive and sublime depiction of the place and the time we live in.