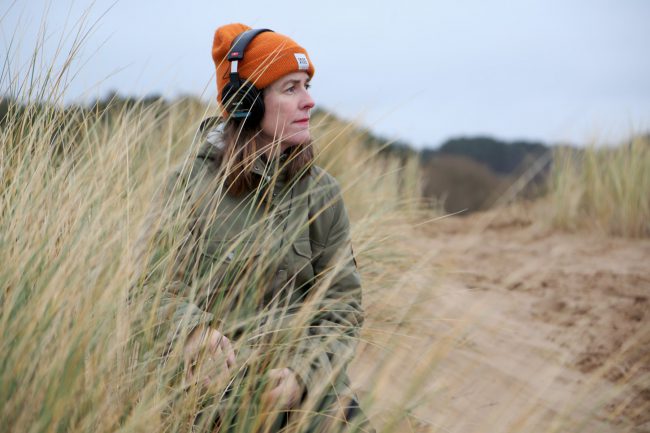 ‘Þytur’* is a sound installation of 9 independent mono channels. The work was created for National Trust Formby** as part of Stefánsdóttir’s site-respondent work titled ‘Spherical White with Diamond’, which was commissioned for ‘NATUR-North Atlantic Tales’ in collaboration with the National Trust (UK). The site is that of shifting shores and one of the most mobile dunes in the UK. Drawing on the concept of multi-entity-performance (Rawlings 2019, Stefánsdóttir 2019), Þytur grew out of field recordings, site specific scores, sonifications, archival digging, activations and improvisations, as a sonic response to National Trust Formby. At the same time the work uses the site’s morphing landscapes and transmogrification, as a key to its composition. Þytur links therefore to entanglement and intra-relating, even in its state of erosion or adaption, meanwhile bearing the signature of much of Stefánsdóttir’s work, which looks at the relation between human and environment.

As part of the event, Halla Steinunn will perform Kent Olofsson’s, ‘Violin with Þytur’ within the installation. The work links to their ongoing collaboration around space and agency within the field of music in the 21st century.

*Þytur is Icelandic for ruffling or whistling.

** The premiere had to be postponed due to the Covid-19 outbreak but the commissioners have graciously allowed for a pre-airing of Þytur.

A special pre-screening of performance videos that are set to be released by Carrier Records in 2022 as part of the ‘strengur’ album project. Instigated by Halla Steinunn Stefánsdóttir the project’s starting point is compositions for violin by Davíð Brynjar Franzson, Kent Olofsson, Mirjam Tally, Luong Hue Trinh and Stefánsdóttir. As a way of modulating the collaborative relationship between performer and composer, she invited Franzson, Olofsson, Tally and Trinh to improvise over the graphic score ‘strengur’ (Stefánsdóttir, 2019). The work was brought forth as a site-specific score created by the gut strings from Stefánsdóttir‘s violin alongside ink and wind at the Klagshamns udde, a peninsula south of Malmö, Sweden. The last stage of the album project sees the composers develop their improvisations into new compositions.

The videos all build on live improvisation and straight takes. The visual component was created by the improvisers themselves. The ‘strengur’ performance stream is supported by the Music Fund of the Ministry of Education, Science and Culture in Iceland.

A work connected to ecology, acoustics and embodiment; drawing on encounters and what happens in the connection. A fluctuation between hear-here-hér*-her.

The work received premiere at Nordic Music Days 2016 and has since then been aired in Iceland, the UK and Sweden. ‘He(a)r’ also exists in a seven movement stereo version, which can be found on Nordic Affect’s album by the same title on the Sono Luminus label.

*hér is the Icelandic word for here.

**jökull is the Icelandic word for glacier.

‘I Play Northern Lights’, created for Nordic Affect’s concert at the 2017 edition of Dark Music Days (IS), is a surround sound installation in two movements. The sounds were recorded by Stefánsdóttir in the company of performer Angela Rawlings as they navigated through the dimmed Northern Lights Hall in Reykjavík, Iceland on one of the first days of 2017. The work was later composed at Inter Arts Center in Malmö, Sweden; to be sent back into space. ‘I play Northern Lights’ is the first work within Stefánsdóttir’s ‘Activation series’, which performs a speculative approach to human sensing and sense-making in relation to environment.

‘I play cement’ (2019) is an audio and video installation. The footage was filmed and recorded in summer and winter 2017-18 as Halla navigated through a closed down cement factory, situated by the mouth of Elliðaár river in Reykjavík, Iceland. The work was later created at Lund University’s Inter Arts Center in Malmö, Sweden. ‘I play Cement’ is the second work within Stefánsdóttir‘s ‘Activation series’, which performs a speculative approach to human sensing and sense-making in relation to environment.

‘I play cement’ was originally created for Dark Music Days (IS). That version, created for two screens and four speakers was later reworked into a version of one screen and 8 speakers for ‘Carbon Ruins – An Exhibition of the Fossil Age’ (SE). It is screened here in a binaural version that was created for the DARE conference at the Orpheus Institute (BE).