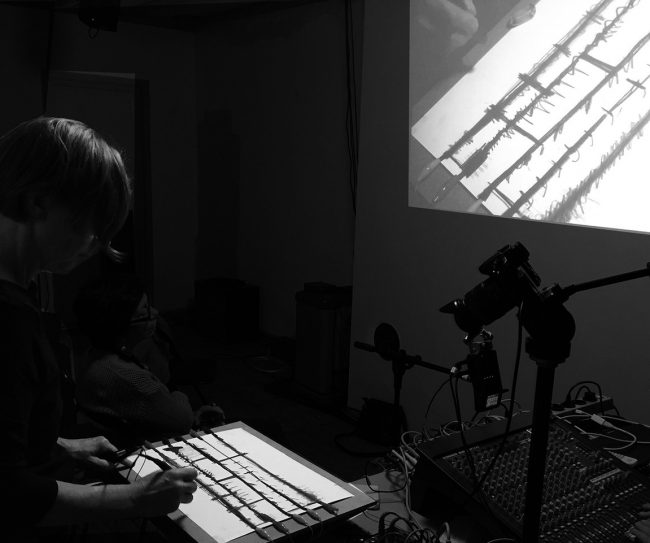 In ‘Drawing Music’ the goal is to develop a work that breaks free from standard concert formats and timeframes. The idea is to explore different aspects of time and spatiality, allow the music, musicians and score to occupy space and freely move around in all dimensions. To give music spatial shape and give sound physical qualities such as size, weight, texture, surface and color.

‘Drawing Music’ is, besides being a project, an instrument and a method which both will be further developed during the work process. The instrument is played by drawing on paper with graphite creating various paths with various resistances that control a software synthesizer. Once having drawn a number of paths you can also play the instrument with an eraser adjusting the paths thickness and you can also cut off certain paths. Yet further control is achieved by patching resistance-less direct paths with crocodile cables using paper-tags as patch-points.

The instrument is scalable and modular, several ‘Drawing Music’ instruments can be connected to each other in different ways forming one large instrument that could be played by several musicians at the same time. This is the basis for the ‘Drawing Music’ method where people in a collaborative way explore the musical possibilities of an installation setting and vice versa.

The drawings resulting from playing the instrument are also a score that the musicians can relate to. The music and the environment relate to each other through the meeting with the audience in the same way as the musicians relate to the drawings and vice versa.

‘Drawing Music’ is a development of the Graphite Barrier instrument and musical performance project.

The ‘Drawing Music’ project and the Barrier Orchestra are different modules in the umbrella project the Great Barrier Orchestra, a trans-disciplinary project in sound art, new music, and performance.

5 December 2019, at 19.00
‘Drawing Music’ Concert with the Barrier Orchestra that on this occasion consists of Sten-Olof Hellström, Jakob Riis, Jørgen Teller and Ann Rosén