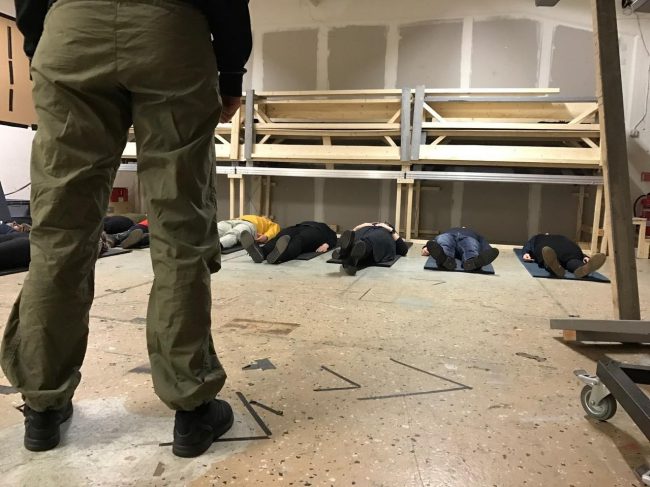 Is there any learning in oppression? The performance Corpus & Punishment examines the mechanics of state violence. It is a pedagogical arrangement where the performers alongside with the audience reenact a chain of possible situations. These situations create a dystopian and yet fully possible idea of a future where a democratic elected party uses the state apparatus to pursue and neutralize its dissidents. The audience will examine the position of the dissidents by reenacting interrogations, isolation and the discursive power to change what is right or wrong.

By making the dangers that lure in our time very concrete through a physical and intellectual experience Corpus & Punishment creates a space for examination and production of knowledge.

This is the second performances in an attempt to make a new generation of learning plays. The first one of these performances was called Violence & Learning and were inspired by Bertolt Brechts “Die Maßnahme”. This learning play examined the extra parliamentary left and the consequences of direct action and political violence. It was rehearsed and partly performed at Inter Arts Center 2016 and later was set up at social centers and theatres in Sweden and Germany. It also had the opportunity to be part of the International Brecht Symposium in Oxford 2016 and at the Performance Philosophy Conference in Prague 2017.