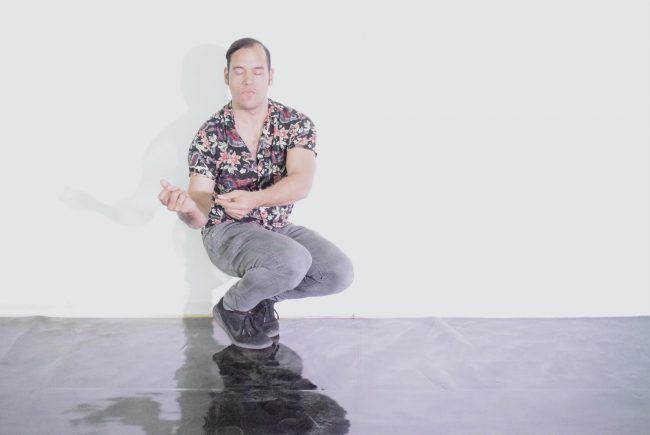 The performance is part of the Performing Arts Festival EAREYE, which will take place from 5 to 7 March 2020 at Inter Arts Center and Inkonst.

‘Breathtaking’ explores an erratic wondering music-making body. Following a performer’s private relation to all that makes sound. Finding specific sounding materiality along the way and organizing its frequencies and distribute it into a room, creating a listening effect. Whether breath, gesture, voice, or any sound-making resources, everything what feels useful to the performer to create sonic happenings in the room, but as well to understand what the next thing is to do. Inquiring if the state of listening could be the choreographic score of the room. What if choreography could be the mere choreography of attention?

Any sound or gesture that appears tells as much about producing sound as listening to it. The performer makes his way through tinkering between meaningful and useless, between composed and self-happening, between pleasure and failure, meandering around in the sirupy intersection between music and dance.

Tian Rotteveel (D/NL) is a Berlin based composer and performer. Studied music composition in the Netherlands (HKU & Royal Conservatory of the Hague) and dance and choreography in Germany (HZT Berlin). In his work he integrates sound and movement as one joined practice. Sound and movement in his work are both processes which can materialize into meaning but as well can materialize into mere sensation. In 2012 he made his debut in the dancemaking community with his solo SoulSqueezing combining both sound and movement in a singular movement practice using continuous ‘automatic’ soulsinging, which offered a selfcomposing score both in sound as well in his physicality. Coming from a strict music composition background the ethical attitude of dance practices towards composition offered a whole different perspective on what composition could be. Tian has an ongoing collaboration with Claire Vivianne Sobottke, Diego Gil, Jeaning Durning, Igor Dobricic and Herman Heisig and has worked both as performer/composer with Tino Seghal, Martin Nachbar, Jeremy Wade, and still composes music for music ensembles.