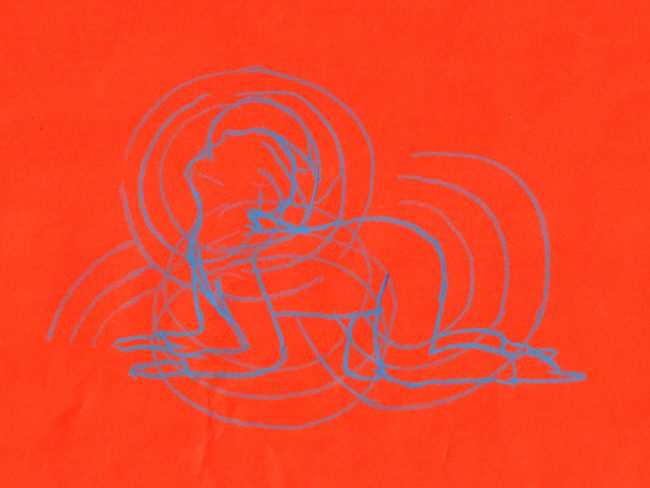 The project “Barbara” (the feminine form of the Greek word barbarous, meaning strange, uncivilized, someone who speaks a broken speech) will depart from Moa Franzén’s work with voice as a choreographic material and tool. Through vocal practices Moa will explore different expressions of what is considered human – as well as nonhuman, or “subhuman” – and how we use them or suppress them according to gendered, social, ideological or private grounds. Where and how is the border between the human and the animal crossed? Where, and when, are the in-betweens and how do they sound? For which bodies?

Moa Franzén is interested in finding ambiguous vocal expressions that confuse or disrupt this ideological landscape, and try out transgressive sonorities for our bodies and experiences and the ways we are able to express them. Voice is the place where body and language meet, it turns language into flesh and it is a body in itself. The starting point will be a place of vulnerability, with vulnerability as material, in combination with voice as a disturbing, disruptive force.

The project will draw its theoretical resources from works such as Donna Haraway’s “Primate visions” as well as Adriana Cavarero’s “For more than one voice”, find inspiration in vocal cultural practices as kulning, professional grievers, growling as well as the vocalities of monkeys. More than anything, it will depart from bodily movement practices and positions; voice is flesh and muscles in movement. The project is in its first phase and will be a practice-oriented research. It will consist of studio work, into which Moa Franzén intends to invite people for workshops and conversations.

Moa Franzén (b. 1985) is an artist, writer and choreographer based in Stockholm. Her practice encircles choreography and writing as interrelated practices, with a special interest in voice as choreographic material and expression. She investigates the relation between performer and audience, writer and reader, by directing attention to and playing with the different forms of submission and opposition that are at play in social relations. Franzén’s works uses the contract of the performative space, the contract between performer and audience, writer and reader, as a material in itself.

By directing attention to the very acts of communication – vocal as well as non-vocal expressions – and the violence as well as restorative potential that comes with them, she tries to make or find breaks or gaps where another kind of listening, another kind of communication – other faculties of attention – can be sketched out and engaged with. Franzén has a MFA in Choreography from New Performative Practices at The School of Dance and Circus, Stockholm.