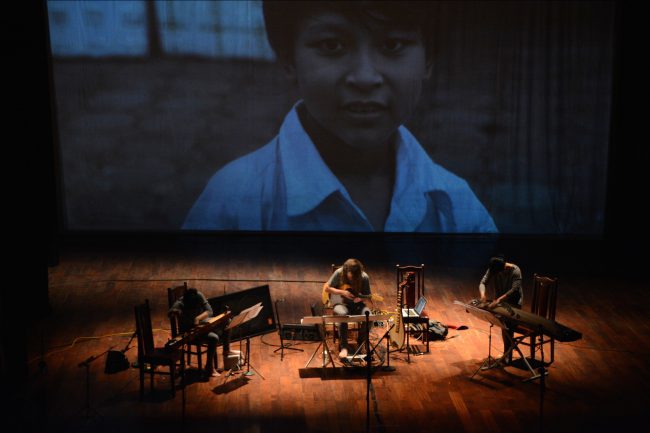 Arrival Cities: Hanoi is a piece of music theatre with documentary film. It seeks a new format for politically informed theatre which is responsive to the challenges of a globalized society. Arrival Cities: Hanoi weaves many individual stories together in an exploration of the dissolution of the relationship with tradition that urbanization brings. The Canadian journalist Doug Saunders discusses 21st century migration in his book titled “Arrival Cities” (2010). Building on research on five continents, his book chronicles the final shift of human populations from rural to urban areas, which Saunders argues is the most important development of the 21st-century. He argues that this migration creates “arrival cities,” neighbourhoods and slums on the urban margins that are linked both to villages and to core cities, and that the fate of these centres is crucial to the fortunes of nations.

The combination of music theatre and documentary film like in Arrival Cities Hanoi is a very new artistic form and the piece made a deep impression on the audience in Hanoi. After seeing the piece for the first time, Luu Ngoc Nam comments: “While I watched the breathlessly silent young audience in the theater, watching the imagery from Tuồng on the screen, and listening to traditional music instruments for over an hour … I can tell how successful the work is” he said. (Hoàng Quân, Thế giới & Việt Nam, 2014-04-11)

The Six Tones have a long history of collaborative work with the Swedish director Jörgen Dahlqvist. In May and June of 2014 they worked together again in Hanoi, making documentary recordings and interviews. Together they visited migration zones in the city and talked to people also out in the countryside. The Long Bien market is one of the central arrival points in the city where street vendors both live in sheds under the bridge and buy fruit and vegetables in the early morning. Chris Humphrey followed the work of the group one day in May 2015 and describes it in a recent article:

“Nguyễn Thanh Thủy, who plays đàn tranh in the band, first interviews Hiep, a 40-year-old street vendor from Ba Vi. Whilst carving pineapples, Hiep tells Thủy that she’s been working in Hanoi since 1999, and lives under Long Bien Bridge. Although she’s been here for many years, she mainly knows people from her own village, and essentially still feels like an outsider. 29-year-old vendor Hue, from the same village as Hiep, tells us about having to make deals with the local police to be allowed to work; although that doesn’t guarantee that they won’t be moved on.” (Humphrey, and of other things, 2015)

While collecting the documentary material, we realised how the performer’s own stories of migration to and from Hanoi had to be part of the piece. In this way, the piece exposes many personal and deeply felt stories and experiences of the fragility that comes with being in a state of migration.

From documentary to the theatre stage

Arrival Cities: Hanoi builds a narrative from the life story of Luu Ngoc Nam, an actor and costume maker in traditional Tuồng theatre. His travels in the country, the homesickness and the tension between traditions that he experiences becomes the source for a further exploration of hand gesture in Tuồng theatre and an expansive portrait of a city vibrant of memories from the Vietnamese countryside. In an interview with Lê Minh Huệ for the Hanoian newspaper Nông Nghiệp Việt Nam, Nam describes his perception of the piece:

“To me, the countryside and Hanoi are like the two sides of the hand. One side is an overwhelming image of a modern city with offices in skyscrapers. If you turn the hand over you see a rural culture being broken to pieces. Arrival Cities: Hanoi expresses exactly what I have experienced, the transition from traditional to modern society. I am surprised to see how a foreigner like Jörgen Dahlqvist can understand the country and make such a bold piece about Vietnam. When I saw the performance the first time, I was speechless with surprise and deeply touched by the stories, so filled with Hanoian character.”  (Lê Minh, Nông Nghiệp Việt Nam, 2015)

Contemporary music on the threshold to Asian traditions

The collaboration between The Six Tones and Kent Olofsson started in 2009. The two first etudes were written in 2009 and 2010 and were released on CD in 2012. By the time of the recording sessions, a more in-depth understanding began to emerge and the music for Arrival Cities followed in 2014. In 2015, an expanded version of the score, which adds an ensemble of nine musicians, was premiered in Vienna with  The Six Tones and Ensemble Reconsil. This version is now presented in Berlin for the first time at Turbulenzen.

The Six Tones is a platform for an encounter between traditional and experimental cultures in Asia and the west. The core of this practice is, since 2006, an ongoing project of mutual learning between musicians from Vietnam and Sweden. The group plays traditional Vietnamese music in hybrid settings for Western stringed instruments and traditional Vietnamese instruments and improvise in traditional and experimental Western idioms and also commission new works in collaboration with artists in Asia as well as in other parts of the world. The Six Tones are Nguyễn Thanh Thủy (who plays đàn tranh) and Ngô Trà My (who plays đàn bầu), two Vietnamese performers, and the Swedish guitarist Stefan Östersjö.

Teatr Weimar is a performing arts collective in Sweden, situated in Malmö. Teatr Weimar brings playwrights, directors, actors, musicians and other artists together to explore the boundaries and expressions of contemporary performing arts. Jörgen Dahlqvist is a playwright, director, video artist and, since the start in 2003, the artistic director of Teatr Weimar. Kent Olofsson is a leading Swedish composer and a recipient of several international composition awards. His music has a wide span from intricate solo works and ensemble works with electronics to large scale works with orchestra. In recent years, Olofsson has explored the potential for experimental music theatre to challenge the contemporary practice of musical composition. Together Dahlqvist and Olofsson have produced more than twenty productions that include theatre performances, music/video concerts, radio drama and video/sound installations.

Produced by Teatr Weimar and Ars Nova with support from Musik i Syd.