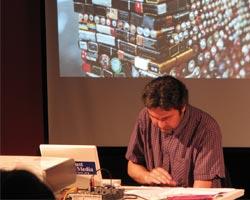 Subjects for further research are (in no particular order):

– The very idea of a typology itself, how it can become an analytical tool rather than a list to cross off. Meaning a theoretical separation betweendescriptive and prescriptive elements.

– Social history vs. conceptual history, or rather, how they must supplement each other, but with a mapping of the space or movement between them, not least in regards to exhibition-making vis-à-vis the social-economic formation of the artworld.

– The influence of art fair expositions on curatorial techniques, that is in modes of display as much as selection processes. Considering the growth not only of biennale culture, but also art fairs, how have their aesthetics of display and politics influenced art practice and strategies of exhibition-making?

– Whatever happened to the extensive gallery shows of the late 1980s and early 1990s, arguably being a major discursive form (no gallery shows produce catalogues anymore)? When and why did galleries shift from being places of display into being mainly agencies (some time after the late market crash of the 1980s), with their new focus on facilitating curators, placing their artists in biennales and institutions, first and foremost German kunstvereins as the main exhibition form rather han the gallery show itself?

– With the new mysticism in curating, and almost all its practitioners being male, is their a gender of curating, not only a gender politics? In other words, can styles of curating be gendered, specifically as expressions of masculinity? Can, for instance, an analysis along the lines of Klaus Thielewelt’s seminal study Male Fantasies be made on curating?

– A case study of a single wave of ‘newness’ in geographical terms. For example, a study of the Scandinavian miracle; which shows were produced, for how long did they circulate, with which participants in which institutions, and initiated by which figures, funding bodies and agencies? And when and where was a show Nordic, Scandinavian or focusing on a single nation such as Denmark or Sweden?

– The growth in curating programs, and what this implies for curating as both a profession and an academic field.

– The relationship between exhibition architecture and display on the one hand, and narration and articulation on the other.

– A study of failure: which exhibitionary articulations failed, both in their stated aims as well as in their reception.