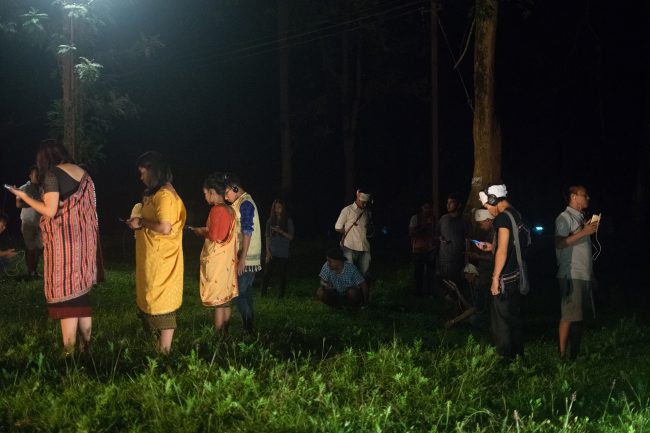 An Unknown Cloud Forming in Malmö, 2021 by Lundahl & Seitl and Untold Garden

Programmed to evolve globally until 2057 as both a myth and a real, live phenomenon, the Unknown Cloud has appeared over large cities, remote villages, across national borders and international sea space.

Unknown Cloud Forming synchronizes the movement of bodies near and far, by bringing people together within a limited time window, often at dusk. With a free App downloaded on their phones, Cloud followers are directed to gather in local flash-mobs on a square, a green area in the city, on top of a hill or in the forest, whereupon they make a collective effort to draw both each other and the Cloud towards them. As soon as the experience starts, their devices cease to be smartphones. The screens go black and they gradually transition from an individual into a collective experience. The smartphone becomes a bi-directional sensory extension to the body – a wand or a sacred object that enables you to experience the otherwise intangible world of the unknown cloud.

Preceded by a rumor to act as an amplifier of one’s senses, the Cloud has an ability to create a portal between the life worlds of human, non-human, geological entities and life forms.

Faced with the contradiction; to imagine something that is already there, but cannot be perceived with their senses, Cloud followers are drawn into an interdependent collaboration to form the cloud. Like a superorganism spread out beyond the borders of their own body, they begin to listen with their hands, hear from the position of another person’s body.. They are nudged into forming larger constellation of bodies to be used as an amplifier to collectively hear traces of our civilisation: radio communication floating through the air, and the invisible communication signals from the mycelium web, the last surviving non-human creature on Earth, underground. By placing your “sensor’’onto your own and (at distance) other bodies to listen for their murmur, you encounter the universe’s own fossils: neutrinos. Neutrinos carry fossilized messages from the universe’s remote past: the radio astronomical sound of the sun, the background radiation of the beginning.

Like the dynamic structure of glacial ice; the deeper you look or listen, the deeper you travel into the cloud, and the further back into the Earth’s geological past you reach. Ice has been consistent in its technology over millions of years. Ice has a memory: trapped air gets squeezed into tiny bubbles, each a record of the atmosphere, each data, collected and kept for millennia. When, as a group, you collaborate to attract the cloud, you become able to collectively pass through the memory of the Earth’s deep past. Some memories will remain as fossils and others will evaporate forever into air, in parallel with the ongoing melting of glaciers globally. When encountering a cloud event it remains uncertain if the cloud is a ritual to generate change or a contemporary ritual of burial. The appearance of the cloud changes the acoustic reverb in the visitors’ headphones. Like a glacier, the cloud appears to have a climate of its own. The light from smartphone screens colour the haze blue, like aged ice, as an interlude to the impending time compression, the cold memory of the earth.

As a measure to prevent the spread of C-19 we have built in a safe distance within the artwork.When people come closer than 1.5 – 2 m to each other, there is a feedback disturbance in their headphones which prompts them to move apart. A focus in the experience is how to establish a connection and presence with each other from a distance.

Go back to Immersive Days #1