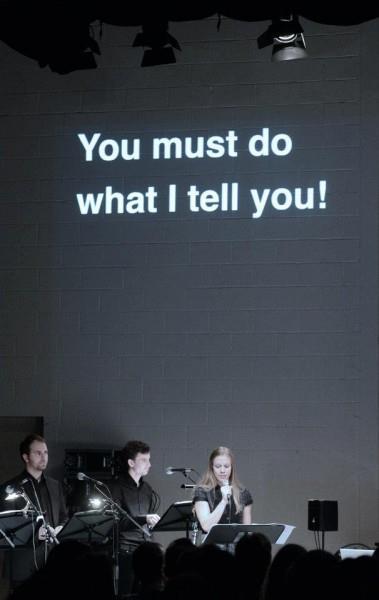 The Gradients. Performance/concert in connection with Soft City in Malmö.

Two graduate PhD students at Cornell University gave voices and 2D avatars to a pair of online chatbots, which they named Alan and Sruthi. Those artificial intelligence robots have held a conversation with each other for the first time with surprising and surreal results – they began to quarrel. During the conversation Alan was accused by Sruthi for being a robot. Alan replied: “I am not a robot, I am a unicorn”. This specific answer can be traced to the “Alice in Wonderland” where Alice meets a unicorn and they both are stunned to see each other, as they never did before. Each one of them says: “I will believe in you if you will believe in me”.

The composition is written for two performers and two video projections and will be performed in The Red Room. Selected text (in form of dialogue) is projected on to the walls, ‘triggered’ by the performers stuttering into the microphones controlling the software which again controls the projections. The dialogue text is taken from the transcripts of the artist’s own dialogues with an artificial intelligence robot. Some questions and answers are generated by the robot itself.

The chatbot I have had contact with does not generate thoughts on its own, instead it creates a composite sentences based on the previous conversations with other people it had during the last 12 years. Therefore it can be stated that the chatbot is a “window” to a public and at the same time private space of the human psyche. The composition is a musical and visual journey to the Wonderland, during which we see how deep the rabbit hole goes.

It will be performed in the Red Room at IAC, Friday 11 September at 9.30 pm, in connection with Soft City in Malmö, a performance programme in Collaboration with Kunsthal Oslo.

Ignas Krunglevicius (b.1979 in Kaunas, Lithuania, lives and works in Oslo, Norway) graduated with an MA from the Norwegian Music Academy in Oslo. Artist and composer, he participates in both the visual art and contemporary music scene, whereby the two occupations influence each other. His main interests lie in the psychology of power, and the political and existential realities generated by the global technological development. Recent exhibitions include the Havana Biennale, Cuba (2015), Nordic pavilion at the 14th International Architecture Exhibition, La Biennale di Venezia, Italy (2014), ‘You Imagine What You Desire’, the 19th Sydney Biennial, Sydney, Australia (2014) and Ultima Contemporary Music Festival, Oslo (2013).