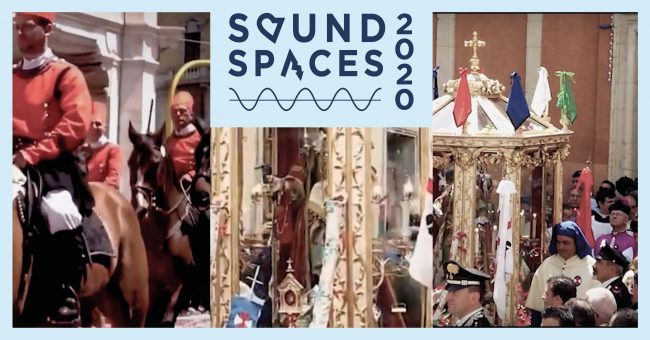 A sound installation by a collective of six composers who delved into Sardinian traditions, between religion and folklore.

The feast of Sant’Efisio is the most important religious procession in Sardinia. It takes place every year on 1 May, uninterruptedly since 1657. It is said that in 1656 the inhabitants of Cagliari prayed Sant’E-fisio to defeat the terrible wave of plague, spread on the island since 1652. The municipal administration of Cagliari then made a vow to the saint: if he managed to defeat the plague, every year there would be a procession and celebrations in his honor, starting from the district of Stampace, until you get to Nora, where the saint had been martyred. In September of the same year, the heavy rains made the plague disappear, and from the following year until today, on 1 May, the vote made is respected. To take part in the parade, groups of people arrive in Cagliari, dressed in traditional clothes, coming from all over Sardinia. For a few hours the city center is filled with sounds, colors and musi-cal traditions of the whole island.

The association Amici della Musica in Cagliari, with the project Tradition and Modernity, has been proposing for some years, the presenta-tion of the most important musical traditions of Sardinia and has also started a contempo-rary reflection on some of these. Hence the idea under the Erasmus Plus project “The soundscape we live in” to propose the con-temporary reinterpretation of some monumen-ts of the identity heritage of Sardinia. Specifi-cally, it was decided to promote registration of the sounds of Sant’Efisio festival, with a group of 9 people who have seen the procession from different locations.

Sounds are recorded by Marianna Murgia