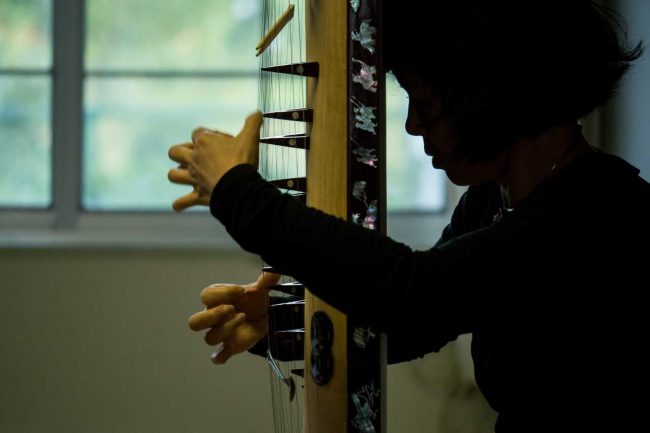 Code to the entrance/elevator at IAC: 123

As part of her Ph.D. defense, Nguyễn Thanh Thủy will give a concert performance including three new compositions for đàn tranh and electronics by Richard Karpen (USA), Lương Huệ Trinh (VN) and Kent Olofsson (SE). Beyond she also presents an exhibition with two installations Inside/Outside (2012) and Vodou vibrations sounds of memories of fields and burdens living in translations and broken bows balancing on plateaus while speaking to one self and scratching the surface of the raft while drifting away (2014) as well as a documentary film entitled The Culture Soldiers.

Nguyễn Thanh Thủy’s Ph.D. project in artistic research is concerned with the function of gesture in traditional Vietnamese music. Building on gender analysis of musical performance in TV shows, and further on autoethnographic inquiry throughout the artistic projects, the artistic output articulates a critical understanding of these practices. The aims of the project are to investigate the social function and meaning of musical gesture in traditional Vietnamese music, and to develop artistic responses that articulate an individual voice. The research questions that emerge from these conceptual and artistic aims are:

The method and design of this Ph.D. project builds on qualitative analysis of gesture in musical performance, with particular emphasis on employing a gender perspective in this analysis. In the artistic work, analysis of gesture has constituted a point of departure for the creation of a series of intermedia works that seek to develop methods that combine the practices of choreography and musical composition. Intercultural collaboration has provided particular challenges and possibilities in the development of each of these works.

For more information about her project, please visit the Research Catalogue.

Nguyễn, Thanh Thủy is a leading đàn tranh player and improviser in both traditional and experimental music. She was born into a theatre family and was raised with traditional Vietnamese music from an early age in Hà Nội. She studied at the Hanoi Conservatory of Music and has received many distinctions included the First Prize and the Outstanding Traditional Music Performer Prize in the National Competition of Zither Talents in 1998.

Nguyễn Thanh Thủy has recorded several CD’s as soloist with orchestra and solo CDs released by Phương Nam Film (VN), dB Productions (SWE), Setola di Maiale (IT) and by NEUMA Records & Publications (US). She collaborates with composers such as Richard Karpen (US), Kent Olofsson (SE), Nguyễn Thiện Đạo (FR/VN) and Trần Thị Kim Ngọc (VN). The last eight years she has been collaborating extensively with choreographers and theatre directors on many interdisciplinary projects. Between 2009 and 2011, she was involved as an artistic researcher in the international research project (re)thinking improvisation, a collaboration between the Vietnam National Academy of Music and the Malmö Academy of Music.

Since 2012 she has carried out this artistic doctoral project at the Malmö Academy of Music concerned with the function of gesture in traditional Vietnamese music. The aims are to expand the expressive scope of her performance, through cross-disciplinary and intercultural collaboration and to question current gender norms that shape the present-day performance culture of traditional Vietnamese music.