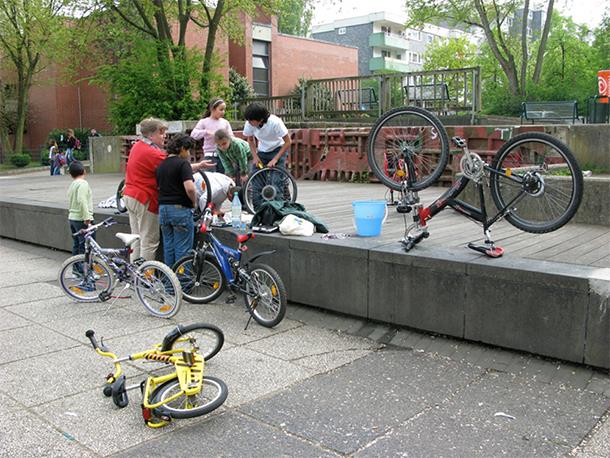 Participatory Practices in Art and Architecture – Listening, Translating, and Curating

The two-day symposium “PP in AA” wants to reexamine the issue of participation in contemporary art and architecture practices. In recent decades, art and architecture’s engagement with concerned publics and communities have manifested in range of different ways. These participatory efforts have also been frequently criticized by political scientists, geographers, planning theorists, architects, artists, and art theorists: instead of creating more democratic spatial processes and outcomes, it has been argued that citizen dialogue processes fail to have long-lasting effects or even become complicit in the agenda of neoliberal urban redevelopment. Against these criticisms, it can instead be argued that a range of participatory possibilities exist today which might fruitfully be explored, even if the outcomes of such exploration is not immediately calculable. This symposium attempts—in contrast to views that either look at short-term utilitarian solutions or take their point of departure in negative or dystopian lines of thinking about collaboration—to reread ‘participation’ through the concepts of translation, listening, and urban curating, concepts which demand the unearthing of alternative approaches to participatory practice.

Participation in this mini-symposium is free of charge, but places are limited. Please register your interest to take part by emailing: bettina.schwalm@arch.kth.se

The event is organized by Apolonija Šušteršic, Gunnar Sandin, and Meike Schalk, and supported by ResArc (the Swedish school of architectural research), Architecture in Effect (the strong research environment at KTH), the faculty of Urban Design at KTH, Oslo National Academy of the Arts, and the Inter Arts Center in Malmö.

Jeanne van Heeswijk is a visual artist who facilitates the creation of dynamic and diversified public spaces in order to “radicalize the local”. Van Heeswijk embeds herself as an active citizen in communities, often working for years at a time. These long-scale projects, which have occurred in many different countries, transcend the traditional boundaries of art in duration, space and media and questions art’s autonomy by combining performative actions, meetings, discussions, seminars and other forms of organizing and pedagogy. Inspired by a particular current event, cultural context or intractable social problem, she dynamically involves community members in the planning and realization of a given project. As an “urban curator”, van Heeswijk’s work often unravels invisible legislation, governmental codes and social institutions, in order to enable communities to take control over their own futures.

Susanne Hofmann is an architect and the founder of Baupiloten, an interdisciplinary practice that specializes in educational buildings and housing since 2001. The foundation of each project is defined by intensive user participation that is integral to Baupiloten’s design process. Their work focuses on innovative experimental design methods and is driven by both a social and ecological agenda. A core team of eight architects and engineers collaborates with various designers, engineers and specialists dependent on each project. Hofmann received her PhD with the thesis, Atmosphere as Participatory Design Strategy (summa cum laude) in 2012. Her most recent book is Architecture is Participation. Die Baupiloten – Methods and Projects (Jovis, 2014).

Elke Krasny is a curator, cultural theorist, and writer. Her theoretical and curatorial work is firmly rooted in socially engaged art and spatial practices, urban epistemology, post-colonial theory, and feminist historiography. In her conceptually driven and research-based curatorial practice she works along the intersections of art, architecture, education, feminism, landscape, spatial politics, and urbanism. She aims to contribute to innovation and debate in these fields through forging experimental post-disciplinary alliances between research, teaching, curating, and writing. One of her major works is Hands-on Urbanism 1850-2012. The Right to Green shown at the Architecture Centre Vienna, the Architecture Biennale in Venice in 2012 and GfZK in Leipzig among other venues.

Stina Nyberg is a choreographer and dancer, making her own work as well as being part of several collaborations and collectives. Her departure point is always the body; its social and political construction and its ability to move. In 2014, she was invited to host one of the acts in the project “Rehearsals – eight acts of the politics of listening” by Sofia Wiberg and Petra Bauer. She is currently working on a contemporary mime about how the body serves as a blueprint for society.

Sofia Wiberg is a political scientist and a researcher in planning theory. She has extensive experience in participatory processes, collected from her previous work with citizen dialogues. Her research interests deal with issues of citizen participation in planning processes in relation to power, democracy and space. Recently, she has been collaborating with Petra Bauer in the project, Rehearsals – eight acts of the politics of listening. In 2015, she has co-published the anthology, Medborgardialog – demokrati eller dekoration? 12 röster om dialogens problem och potential i samhällsplaneringen (Stiftelsen Arkus).