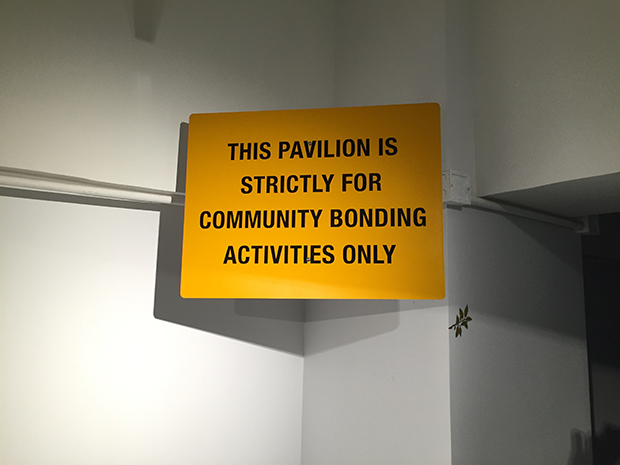 ‘Notes From Plausible Futures’ combines ready-made performances, artist talks, conversations and pirate screenings that will happen over a span of an entire twenty four hours. This micro-exhibition is devised to provide entry points into the work of the artist Heman Chong, whose work is located at the intersection between image, performance, situations and writing. Please join us whenever you like. The artist will be present during the whole exhibition period. Read the programme below and choose when you would like to come, preferably, as late as possible.

Heman Chong is on an Iaspis residency for two months at IAC, and hosted by IAC.

“Connecting and collating people, things and information in a practice that often extends beyond the creation of discreet art objects, Heman Chong uses the structures of language to talk about the idea of content. He does this through the production of individual artworks, but also through his work as a curator and writer — although such distinctions between artist, curator and writer can distract from the complexity of Chong’s purview, as his collaborations can take on many forms, regardless of the role he is invited to play. Chong rarely performs the part of cultural producer straightforwardly; he is generally ‘all of the above’ at any given occasion. Therefore, his activities don’t sit comfortably within the delineated categories that typically comprise the distribution of content. Books, exhibitions, institutions, paintings — all are vehicles for content whose structures come under Chong’s scrutiny.” Ruba Katrib, ‘A Tear in the Fabric of Reality’.

Utilizing the words written or spoken by artists, Words, They, Wrote, is a performance embedded within a symposium, a lecture, a panel discussion, or an exhibition space. Allowing a retrospective moment where the audience can listen in on what artists write about their lives, their work, and negotiate objects and situations out of texts. This performance points to an approach taken by artists that is located at the intersection of visual art and literature, further complicating the entanglements between text and image. It is accompanied by a slide show of the title of art works and the names of artists, which in fact, are objects in themselves that parallel the staging of the works. It can be seen as an proposal for an imaginary exhibition; one that is constantly morphing itself to the space and the context in which the space is located in. There is no fixed list of artists and texts in Words, They, Wrote. The list is always changing. This list never stops. There will always be more words, more works.

An individual sits alone in a space. It is now revealed that this individual is a reader. He or she is reading out from what is on the screen of his or her own phone. Beginning with the article of the day on the Wikipedia site, the reader moves from that article to the next by clicking only on the 5th link on that page. And so, he or she reads on, from one article to the next, to the next, to the next. This performance is repeated throughout the duration of the exhibition. Everything (Wikipedia) is a durational performance that is a futile attempt to vocalize everything about the world. The hyperlinks across a multitude of entries eventually spirals into the depths of irrelevance.

Improvisation and Informalities
A conversation between Heman Chong and Christian Skovbjerg Jensen, 2016

‘Improvisations and Informalities’ is a conversation between Heman Chong and Christian Skovbjerg Jensen. It revolves around the relevance and possibility of introducing and establishing an annual symposium/conference/gathering at IAC with artists who are involved in the field of artistic research. The intention is to focus on excavating and testing the tropes and methods of artistic research made within a practice based PhD format, and to produce encounters with artists who work outside of it.

Pitfall is a 1962 Japanese film directed by Hiroshi Teshigahara, written by Kōbō Abe. It was Teshigahara’s first feature, and the first of his four film collaborations with Abe and Takemitsu, the others being Woman in the Dunes, The Face of Another and The Ruined Map. Unlike the others, which are based on novels by Abe, Pitfall was originally a television play called Purgatory. Pitfall is set against the background of labour relations in the Japanese mining industry, but the film owes as much to surrealism as it does to “socially aware” drama. The mine in the film is divided into two pits, the old one and the new one, each represented by a different trade union faction.

Je t’aime, Je t’aime is a 1968 French science fiction film directed by Alain Resnais from a screenplay by Jacques Sternberg. The plot centres on Claude Ridder (Claude Rich) who is asked to participate in a mysterious experiment in time travel when he leaves hospital after a failed suicide attempt. The experiment, intended to return him after one minute of observing the past, instead causes him to experience his past in a disjointed fashion. His fate is left ambiguous.

The Fly is a 1986 American science fiction horror film directed and co-written by David Cronenberg. Loosely based on George Langelaan’s 1957 short story of the same name, the film tells of an eccentric inventor and scientist who, after one of his experiments goes wrong, slowly turns into a deadly fly-hybrid creature. The Fly was critically acclaimed with most praise going to Goldblum’s performance and the special effects. The quote “Be afraid. Be very afraid.” was also used as the film’s marketing tagline, and became so ingrained in popular culture (as it—and variants—have appeared in countless films and TV series) that a large number of people who are familiar with the phrase have no idea that it originated in The Fly.

All synopsis of film adapted from Wikipedia.