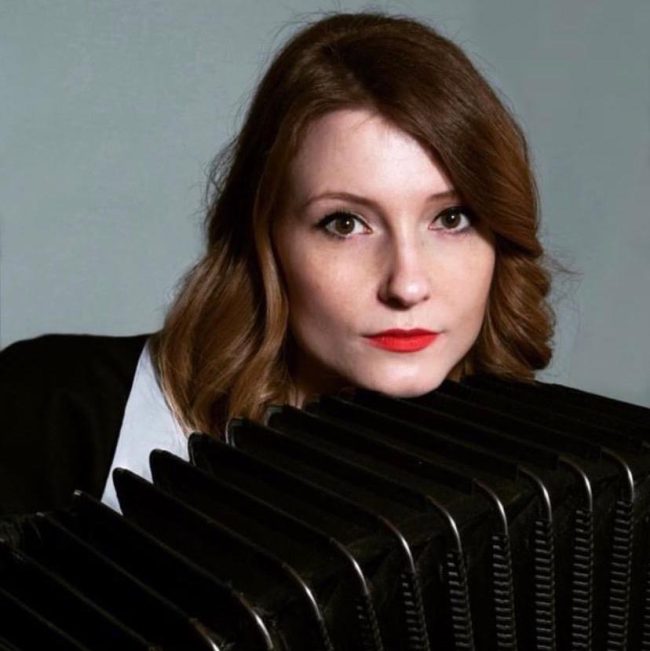 Margherita Berlanda accordion and performance The BEYOND project for an accordionist and performer, was born with the desire to investigate the sound potential of the accordion by expanding the research field both to elements external to the instrument (small percussions in the case of NE MA-UM, ghost sounds in Roberto Vetrano, the pick on the keys of the accordion in Nikolaus A.Huber piece.), and to the body of the musician himself (Sprechgesang in Keiko Harada’s Book One).

A strong narrative connotation also characterizes the repertoire presented: ‘Book I’ is taken from a Japanese collection of Haiku, ‘Mein Herz ‘by H.C. Artmann is the starting point for the composition of Younghi Pagh – Paan and Acustica III by Roberto Vetrano (première May 2022 for Rondò Festival – Divertimento Ensemble), based on the graphic works of Gastone Novelli and ‘Auf Flüeeln der Harfe’ refers to a love poem by Heinrich Heine with the similar title “Auf Flügeln des Gesanges”. The project was presented in Milan for Rondò Festival in May 2022 and in Traiettorie Festival in Parma (June 2022) and it is scheduled for the Malmö Academy in Sweden (October 2022).

Margherita Berlanda is one of the most relevant and polyhedric Italian accordionist, particularly devoted to the research in contemporary music field. Investigation through different aesthetics and artistic expressions played a central role in her personal research and led her to approach also he performance field. Her focus on contemporary arts brings her to collaborate actively with various composers, such as Samir Odeh-Tamimi, Giorgio Colombo Taccani, Manuela Kerer, Anna Sowa, Farzia Fallah, Marco Momi, Sidney Corbett and Nikolaus Brass. She has performed for internationally known festivals such as the International Koper Biennial, Milano Musica, Rondò Festival Milan, Transart Festival Bozen, Traiettorie Festival Parma, Unerhörte Musik Festival Berlin, and many others.