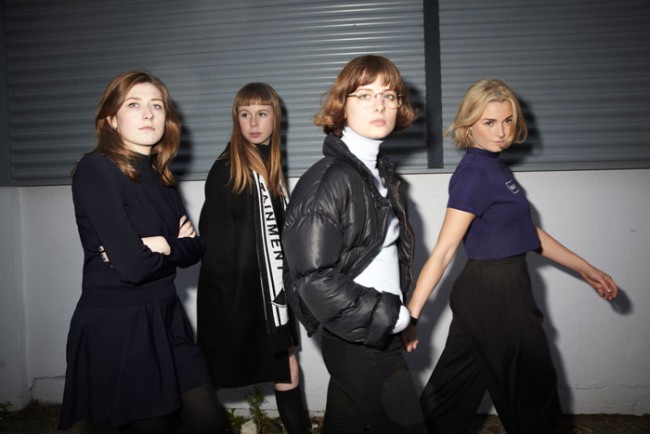 Organisers Inkonst, CTM, EMS, IAC and Unsound are extremely proud to present four days of innovative music at the highest international level, ranging from exquisite sound explorations and extraordinary rhythmical experiments to some of the finest dance floor acts in the world.

We want Intonal to be a place where seemingly difficult and inaccessible musical expressions are transformed into open and joyous experiences. We believe that if artists are granted freedom to explore their musical limits and move beyond existing conventions, open-minded attendants will be handsomely rewarded. Curiosity is the nemesis of boredom.

For the full festival line-up, see the festival website.

In collaboration with C-Y Contemporary

”In the Greenery” brings together three sound installations, where memory, forgetfulness, loss, and transformation are at the heart of the narrative. As a visitor, you enter an acoustic and visual environment composed of light, sound, green plants, constructions, and suggested actions. A narration unfolds that revolves around light and image making; memory and meaning; attempts to capture words and to control images. Four characters stand out as key figures, for whom the relation between the concrete world and its representations has been turned upside-down. “Greenery” may refer to foliage, the main organ of photosynthesis, or to greenhouses, environments designed to enhance rapid growth and development. What kind of growth and transformation the different apparatuses in the exhibition have to offer though, is an open question.

Welcome In, Outside is a meditation on the illusory nature of the inside/outside distinction. “The experience that I seek to have while listening to this sound is a complete collapse of the sense of there being a duality between that which is heard and the one who hears, between self and other, subject and object. In certain styles of Buddhist philosophy and practise, this is what is called nondual awareness. There is no in here. There is no out there. Here, in the realm of nondual awareness, reality is revealed to be empty of this kind of duality. Inside is outside. Outside is inside.”

A series of sound miniatures with some short stories in between.  A table with strange things. Performer: Max Wainwright

IAC at Inkonst, The Theatre

Acousmatic For The People

The art of sound diffusion is in focus at the Acousmatic for the people concerts. The music is diffused through an acousmonium, a loudspeaker orchestra consisting of 40 speakers, in order to create an immense listening experience. At the concerts many brand new pieces will be presented along a classical piece from the field of electroacoustic music.

Acousmatic For The People #1

The first concert of AFTP will start with a brand new work by Katt Hernandez created with sounds from pipe organs and analogue synthesizers. Ellen Arkbro will perform her Pink Television for electric guitar, electronics and video, a piece described as ”composed harmony”. Furthermore in the concert Alessandro Perini will diffuse pieces by Irene Pacini and Miguel Llanque Montano.

Acousmatic For The People #2

At the second AFTP concert Else Marie Pade’s classic piece “Symphonie magnetophonique” from 1958-59 will be performed. She was the first Danish composer to work with electronic music and was a pioneer in the field. The piece will be diffused by composer Jakob Riis who will also present a brand new work created at the studios at IAC. The concert will also include a piece by the resident composer at IAC this spring, Pablo Silva from Mexico.

Acousmatic For The People #3

At the last concert of AFTP two premieres will be presented, one by Camilla Söderberg and one by Fabio Monni, a suite from his radio opera What’sThat?. The concert further includes music by Kent Olofsson and by Danish composer Hans Peter Stubbe Teglbjerg, a piece created with the technique of physical modelling of sounds. The concert will also include a piece by the resident composer at IAC this spring, Pablo Silva from Mexico.

ORGANIZERS & PARTNERS
Intonal is a collaboration between Inkonst, CTM, EMS, IAC and Unsound. This project is realized with the gracious support of the Swedish Performing Arts Agency, the Region of Skåne, Goethe-Institut, the Polish Institute and Musik i Syd. The festival after parties will be held in collaboration with Kontra-Musik, Fasaan and Sorgenfri Kultur.

Inkonst is an international art center in Malmö, Sweden featuring music, theatre, dance, performances, film, literature and art all under the same roof. Our aim is to present the world of contemporary art and create a platform for the new upcoming, along with the already established generation of artists, directors, musicians, film makers and culture promoters, nationally and internationally.

CTM – Festival for Adventurous Music and Art – takes place yearly at the end of January in Berlin venues including HAU – Hebbel am Ufer, Berghain, and Kunstraum Kreuzberg/Bethanien. Through 16 years of existence, CTM has earned a place among major music festivals worldwide as one of the most important festivals for innovative pop, electronic, and experimental music. An essential rendez-vous for international artists and professionals, the festival takes shape as a mix of concerts, club nights, exhibitions and installations, as well as an extensive daytime conference programme, mixing DIY pop culture methods together with academic research and social discourse.

EMS is the centre for Swedish electroacoustic music and sound-art since 1964 and is based in Stockholm. EMS is run as an independent part of Musikverket (Swedish Performing Arts Agency).

Inter Arts Center – IAC is a meeting point for different art genres, for art and modern technology, for researchers and artists, and for experimental and interdisciplinary art. Inter Arts Center (IAC) was established by the Faculty of Fine and Performing Arts at The University of Lund in 2011 and is located on the third and fourth floor of the old Mazetti chocolate factory in Malmö, upstairs from Inkonst.

Unsound is an amorphous music festival based in Kraków, with events in New York, London, Adelaide. They deal with vibrant electronic, experimental, independent and club music scenes from all around the world, often commission new work and collaborations, and like taking risks.

Kontra-Musik  is a Malmö based record label who has played a major part in spreading Swedish electronic music internationally.

Fasaan Recordings is a Malmö based music imprint searching for the more unobvious shades of dance and listening music.