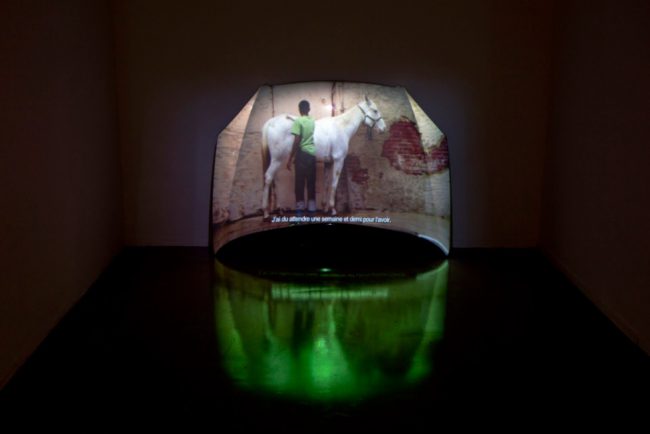 Algerian-born, Paris-based artist Mohamed Bourouissa uses images, installations and videos to explore power relations, displays of masculinity, and societal tensions, often by referencing art-historical imagery. He describes contemporary society implicitly, by its contours. With a critical take on the mass media image, the subjects of his photographs and videos are people left behind at the crossroads of integration and exclusion. As well as his numerous solo exhibitions at esteemed institutions – such as Musée d’Art Moderne de la Ville de Paris; the Centre Pompidou, Paris; the Stedelijk Museum, Amsterdam; and Haus der Kunst, Munich, to name only a few – and participation in well-known biennials, he has been nominated for the Marcel Duchamp Prize (2018) and in 2017 was selected for the Pictet prize.

Intonal will host a multi-screen installation of his 2015 film, Horse Day, in which Bourouissa captures the urban cowboys of North Philadelphia. Focused on a fascinating equestrian event, this film celebrates these urban riders while questioning traditional images of cowboys. Inspired by US photographer Martha Camarillo’s photographs of horsemen in Strawberry Mansion, an impoverished Philadelphia neighbourhood, Bourouissa travelled there to see the urban stables. For eight months the artist observed, drew, and photographed the riders. With a strong collaborative sensibility, Bourouissa worked with the community, which led him to Horse Day. The video documents the event and its preparations, and acts as an examination of how society is structured and social processes are activated.