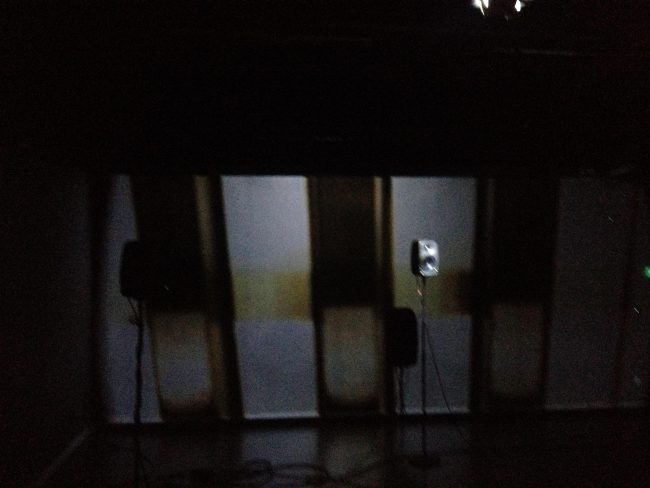 Eva Sidén (SE) and Christian Rønn (DK), has recorded sounds from the concerthall “Studio Acusticum” in Piteå, Sweden, where one of the worlds most interesting and modern concert-organs has been built inside the concerthall Studio Acusticum, one of the most advanced concert halls in Northern Scandinavia. During a one week residency, we captured sounds and video from the Concert-organ and the Grand Piano, preparing the instruments and recording them in non-traditional ways, using a large array of microphones, in order to end up with a “library” of interesting sounds and images out of which to compose the multichannel piece “Inside Inside”, which is a 7-channel audio-visual installation, finalized and mixed at EMS (Elektronmusikstudion, Centre for Swedish electroacoustic music and Sound-art) in Stockholm.

We started our process in Piteå with the intent of writing a 40 minutes concert-piece, and quickly the word “Inside” became an obvious theme; relating for different reasons and with different connotations, both to Piteå as a city, the building that houses Studio Acusticum, as well as to the instruments, and to our daily work harvesting sounds and images from them. The idea arose to make a piece with other pieces inside of it, making it possible to realise different versions, in a big concert hall, as well as in smaller clubs and as an installation in a gallery or at a museum as a concert-installation.

The larger concert-piece “Inside” is built around the Sound-installation “Inside Inside” and houses this shorter Installation-piece in the midst of its own greater forms and sounds, comprised of live played Organ, Grand Piano and video.

Video-footage from inside the instruments and concerthall have been manipulated and adopted into an accompanying visual-experience, to be added as a part of the installation or concert, wherever space allows.

During the recording of the organ used for the piece, we were immensely inspired by the unique way in which it is possible to manipulate the air-supply to the different parts of the organ, in order to achieve extreme or subtle pitch-fluctuations and sound-artefacts, stemming from the fact that the pipes pitch and sound unusual when applied the differentiated air-supply during performance.

The premiere of “Inside” took place in Studio Acusticum, during our second trip to Piteå, where we also held a masterclass for the composition- and organstudents at the conservatory.

At Inter Feral Arts II we will present a version of the piece, for two pianos and electronic.