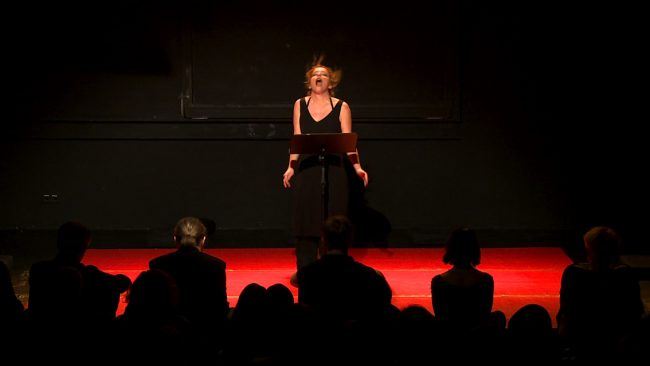 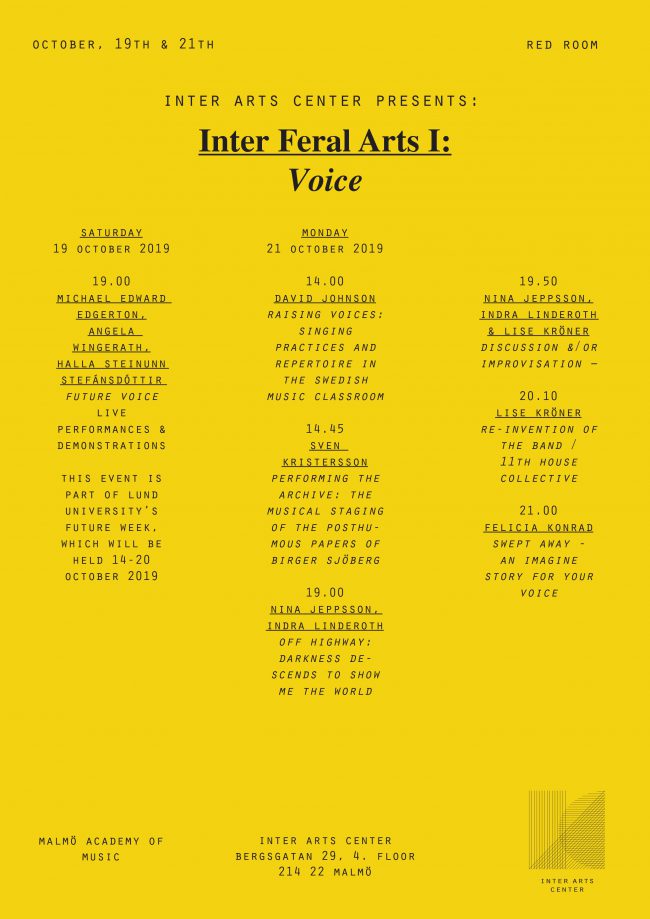 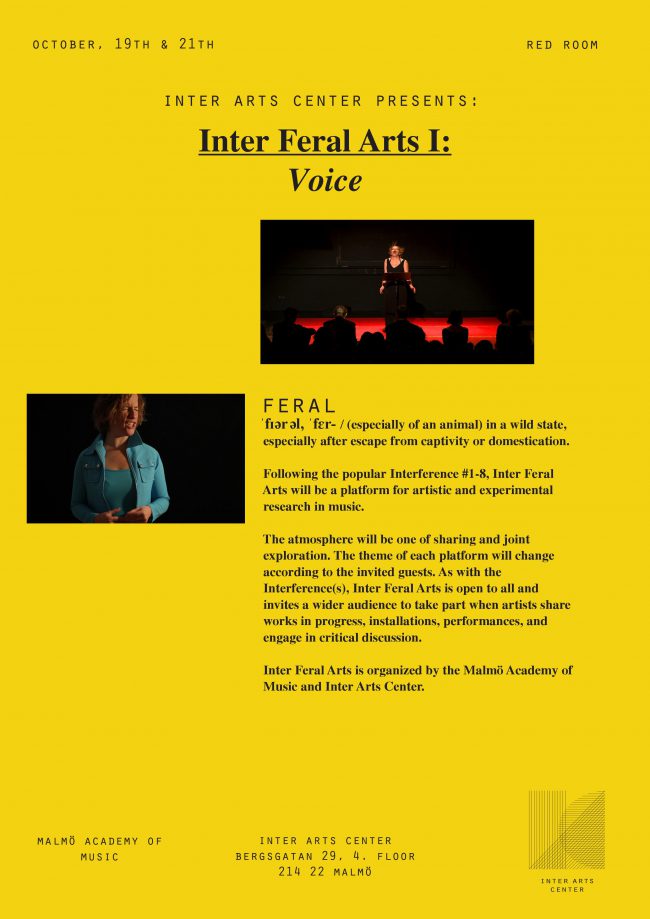 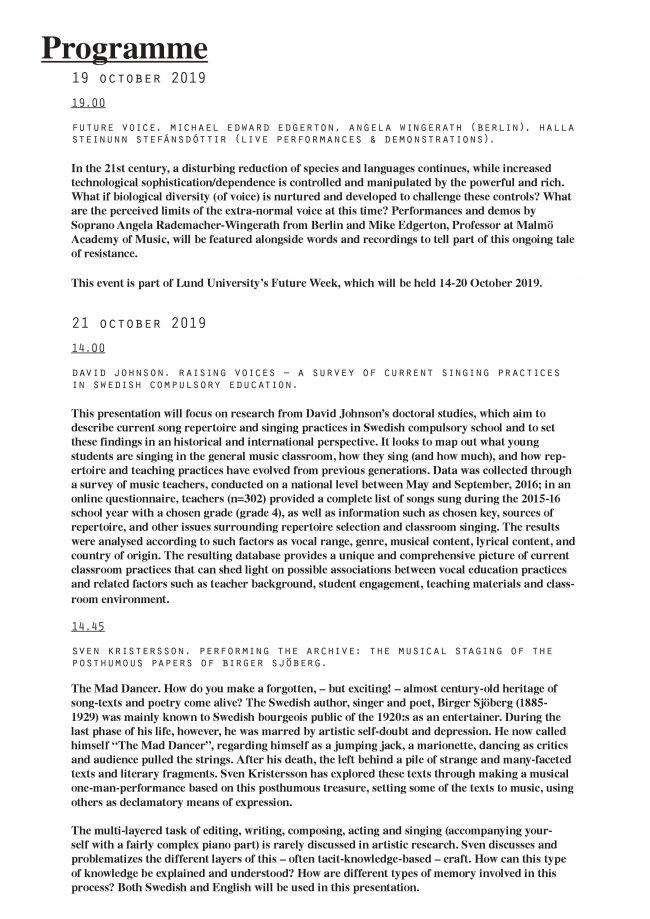 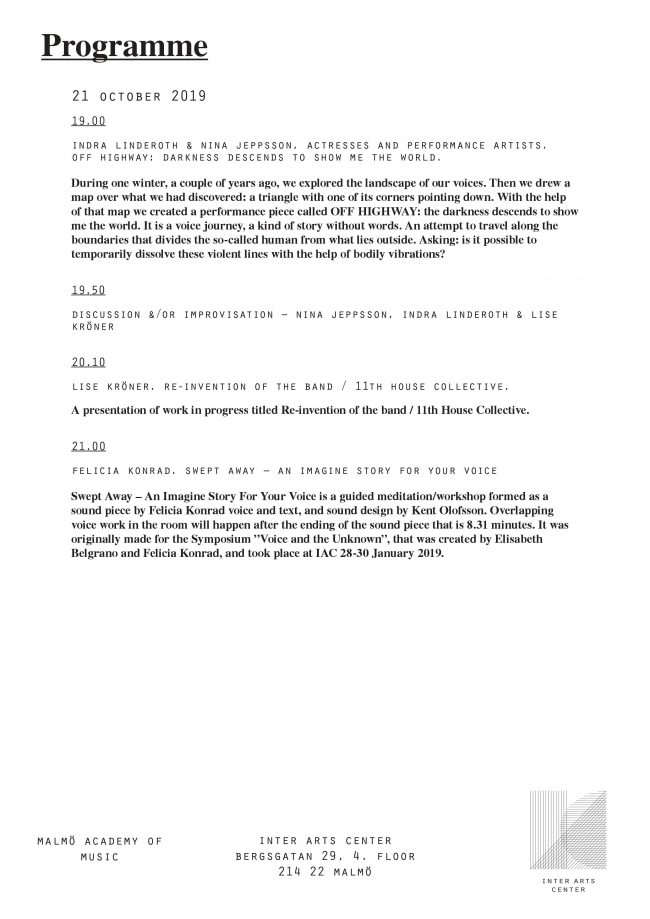 Feral. / ˈfɪər əl, ˈfɛr- / (especially of an animal) in a wild state, especially after escape from captivity or domestication.

Following the popular Interference #1-8, Inter Feral Arts will be a Platform for Artistic & Experimental Research in Music.

The atmosphere will be one of sharing and joint exploration. The theme of each platform will change according to the invited guests. As with the Interference(s), Inter Feral Arts is open to all and invites a wider audience to take part when artists share works in progress, installations, performances, and engage in critical discussion.

Inter Feral Arts is organized by the Malmö Academy of Music and Inter Arts Center.

In the 21st century, a disturbing reduction of species and languages continues, while increased technological sophistication/dependence is controlled and manipulated by the powerful and rich. What if biological diversity (of voice) is nurtured and developed to challenge these controls? What are the perceived limits of the extra-normal voice at this time? Performances and demos by Soprano Angela Rademacher-Wingerath from Berlin and Mike Edgerton, Professor at Malmö Academy of Music, will be featured alongside words and recordings to tell part of this ongoing tale of resistance.

This event is part of Lund University’s Future Week, which will be held 14-20 October 2019. More about the week here.

This presentation will focus on research from David Johnson’s doctoral studies, which aim to describe current song repertoire and singing practices in Swedish compulsory school and to set these findings in an historical and international perspective. It looks to map out what young students are singing in the general music classroom, how they sing (and how much), and how repertoire and teaching practices have evolved from previous generations. Data was collected through a survey of music teachers, conducted on a national level between May and September, 2016; in an online questionnaire, teachers (n=302) provided a complete list of songs sung during the 2015-16 school year with a chosen grade (grade 4), as well as information such as chosen key, sources of repertoire, and other issues surrounding repertoire selection and classroom singing. The results were analysed according to such factors as vocal range, genre, musical content, lyrical content, and country of origin. The resulting database provides a unique and comprehensive picture of current classroom practices that can shed light on possible associations between vocal education practices and related factors such as teacher background, student engagement, teaching materials and classroom environment.

14.45: Sven Kristersson. Performing the archive: the musical staging of the posthumous papers of Birger Sjöberg.

The Mad Dancer. How do you make a forgotten, – but exciting! – almost century-old heritage of song-texts and poetry come alive? The Swedish author, singer and poet, Birger Sjöberg (1885-1929) was mainly known to Swedish bourgeois public of the 1920:s as an entertainer. During the last phase of his life, however, he was marred by artistic self-doubt and depression. He now called himself “The Mad Dancer”, regarding himself as a jumping jack, a marionette, dancing as critics and audience pulled the strings. After his death, the left behind a pile of strange and many-faceted texts and literary fragments. Sven Kristersson has explored these texts through making a musical one-man-performance based on this posthumous treasure, setting some of the texts to music, using others as declamatory means of expression.

The multi-layered task of editing, writing, composing, acting and singing (accompaying yourself with a fairly complex piano part) is rarely discussed in artistic research. Sven discusses and problematizes the different layers of this – often tacit-knowledge-based – craft. How can this type of knowledge be explained and understood? How are different types of memory involved in this process?

Both Swedish and English will be used in this presentation.

During one winter, a couple of years ago, we explored the landscape of our voices. Then we drew a map over what we had discovered: a triangle with one of its corners pointing down. With the help of that map we created a performance piece called OFF HIGHWAY: the darkness descends to show me the world. It is a voice journey, a kind of story without words. An attempt to travel along the boundaries that divides the so-called human from what lies outside. Asking: is it possible to temporarily dissolve these violent lines with the help of bodily vibrations?

A presentation of work in progress titled Re-invention of the band / 11th House Collective.

21.00: Felicia Konrad. Swept Away – An Imagine Story For Your Voice

Swept Away – An Imagine Story For Your Voice is a guided meditation/workshop formed as a sound piece by Felicia Konrad voice and text, and sound design by Kent Olofsson. Overlapping voice work in the room will happen after the ending of the sound piece that is 8.31 minutes. It was originally made for the Symposium ”Voice and the Unknown”, that was created by Elisabeth Belgrano and Felicia Konrad, and took place at IAC 28-30 January 2019.