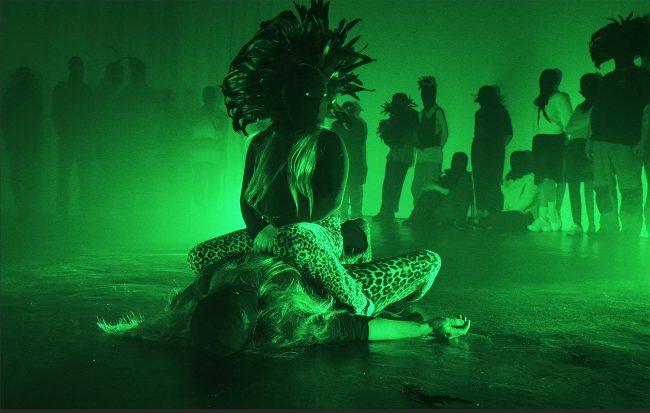 The performance ‘Game Changer’ was developed during a longer artist in residency stay at IAC from 2020-2022. It is finally time to show it for an audience, first in Umeå at Bildmuseet 16–17 September and then for the Malmö audience during Malmö Gallery Weekend at Lilith Performance Studio 23–24 September in conjunction with an artist talk at IAC, about the whole process during the residency.

The project’s main purpose was to create an experimental sound piece and an interactive choreography for a future commission performance at Bildmuseet in Umeå. The pre-study was divided into different parts; individual work and a workshop with performers and dancers, a pre-performance with the performers and a test audience in May 2022, and now an open talk by Lundgren and Pettersson at IAC on the 24 September.

‘Game Changer’ is a performance that explores our need for adaptable group affiliation and rebellious individualism, where the boundary between viewer and actor dissolves. Visitors enter a dim lit club environment, each dressed in anonymizing hoods decorated with carnivalistic feathers. Our need and longing for intimacy, comfort and fulfillment are tested and processed through gestures, rituals, and impulses. ‘Game Changer’ dissolves and shifts the boundaries between visitor and actor as each visitor chooses how they participate.

LILITH is the artist duo Elin Lundgren (1973) and Petter Pettersson (1972). Through performances that touch on community, group belonging and exclusion, LILITH constructs their works as living images infused with an absurdist sense of humour and a stripped-down documentary narrative. Their key concerns revolve around universal human issues such as love, loss and sadness, they are propelled by a desire to move into the audience’s consciousness like a disorder, all the while hoping to understand what it means to be a human being.

Lundgren (f.1973) and Pettersson (f.1972) have worked together with visual and performing arts in various forms since 1999. In 2007, the artist duo founded the acclaimed performance studio – Lilith Performance Studio – an independent arena for practical artistic research focusing on newly produced large-scale art performances by invited artists from all over the world.

Siri Jennefelt (b.1989) is a composer and sound designer. She has composed electronic music for numerous performances, as well as performed her music live in several performances. Since 2019, Siri performs with Ellen Norlund in their performance duo The Wind.

The performance is a commission for Bildmuseet with support from Norrlandsoperan, Vita kuben, Umeå Kommun and Inter Arts Center Malmö.

‘Game Changer’ will be premiering at Bildmuseet Umeå 16-18 September 2022.

Read more about the performance weekend at Bildmuseet in Umea – bildmuseet.umu.se

The work was scheduled to be shown in a smaller scale at the 7a * 11d International Festival of Performance Art in Toronto in September 2022, but due to the new Covid restrictions in Canada the performance is postponed until 2024.

Read more about the 7a * 11d International Festival of Performance Art in Toronto here – 7a-11d.ca