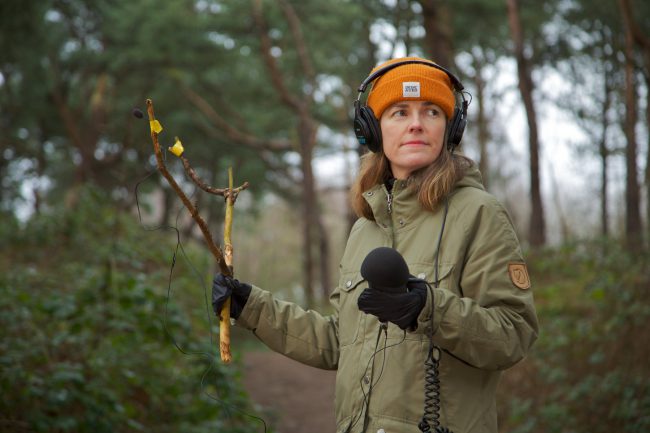 ‘Fjärilarna steg upp’ [The butterflies ascended] is a sound installation of 8 mono channels, specially created for the tropical palm house at the greenhouse of The Botanical Garden in Lund.

It is the third work in Stefánsdóttir’s ‘Activation series’ and springs out of a performer’s engagement with a virtual entity, namely the book ‘Tapeshavet’ [Tapes Sea] (2017) by Gunnar D. Hansson. Through this book, Hansson explores Härnäset on the west coast of Sweden across temporalities. By looking at the sites’ transformation in such a geopoetic way, the book becomes a mirror for climate change.

The installation grew out of activations of fossilised oceans, abandoned quarries and 920 million year old granit but also through the construction of a performance score, which worked as an interface between Tapeshavet, the site, and the greenhouse in Lund. At the same time the work uses the Tapeshavet’s strands of entropy as well as Stefánsdóttir‘s practice of multi-entity performance as a key to its composition. Fjärilarna steg upp links therefore to entanglement and intra-relating, even in its state of eros(ion), meanwhile bearing the signature of much of Stefánsdóttir’s work, which resides at the intersection between human and environment.

Voices and improvisers in the work are Sofia Härdig, Liv Kaastrup Vesterskov and Felicia Konrad.

Field recordings and activations on Härnäset were conducted in the company of Gunnar D. Hansson, Anders Hultqvist and Stefan Östersjö.

All the text in the work is extracted from Tapeshavet by Gunnar D. Hansson

The event is part of the Future week at Lund university.