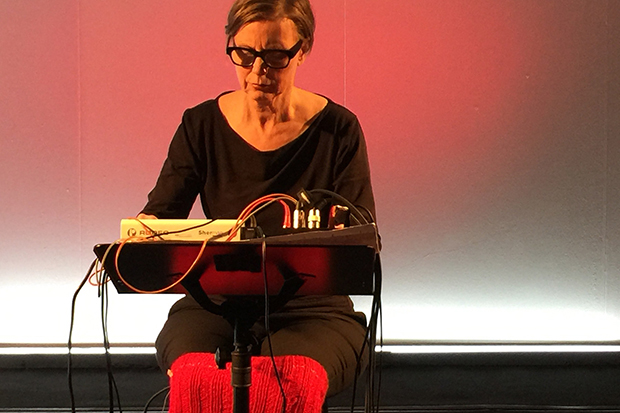 Ann Rosén and Sten-Olof Hellström will perform two of their own compositions in this concert. Both wellknown for their innovative approach to designing and playing electronic instruments.

“Bredvid A” will be performed by Ann Rosén on the kneecuff instrument with live sound diffusion by Sten-Olof Hellström.

“Bredvid A” is about parallel processes that might affect each other but are not linked! It’s like young children playing next to each other rather than with each other. They have a lot in common and can even borrow stuff from each other but they’re still in their own worlds!

“Altered states” is inspired by Ken Russels film with the same name and is about event horizons, tuning points, moments when anything can happen! Impossible sounds, uncontrollable currents and sinister undertones are woven into a twisting sound-weave that is counterpointed by near subsonic glitches and subliminal chaos. The piece is intended for multi speaker systems and uses an interactive maxpatch in order to distribute the sounds to 6-44 channels. The maxpatch analyses the sound and depending on harmonicity, activity, spectral content and balance, previous activity places or moves the sound in the room. Altered States is performed by Sten-Olof on his Clavia Nordmodular syntheseiser an a laptop running the interactive maxpatch.

Ann Rosen, artist, composer and musician
Ann Rosén was originally trained as a sculptor at Konstfack (University College of Arts, Crafts and Design) in Stockholm and has been active as a sound artist and composer since the 90s. In recent years she has received a great deal of attention for the project Syntjuntan and in 2013 their album was awarded the Manifest prize for the best experimental album. With Syntjuntan she has composed music, built instruments and performed nearly two hundred concerts and workshops. Her sound art involves expanding the palette of sounds with timbres using sensors to register changing tensions in cloth instruments to control computer generated sounds and processes. Glitches, sparks and clicks, white noise and electronic artefacts characterise Ann Rosén’s sound world, as do spatial soundscapes created using real-time synthesis.

In recent years the composing – usually in combination with self-made electronic musical instruments – has taken an increasingly large place in Ann’s oeuvre. In the work Resilience and through the Barrier Orchestra, Ann’s long artistic activity is summarized in modular pieces for the custom-built instruments Kneecuff and Inteoch, voice and mixed instrumentation.

Sten-Olof Hellström, composer and electronic musician
In 2013 Sten-Olof celebrated thirty years as a professional composer by obtaining a PhD in composition at University of Huddersfield, UK, with the thesis entitled ”Algorithmically-driven synthesis and feedback system: an investigation into the aesthetic and technical processes in my compositional practice ”. No samples, no sound-files, no sequencers, no presets just pure synthesis is Sten-Olof’s motto! Even though he might occasionally diverge from his puristic approach he always returns to the narrow path. Sten-Olofs music has been performed and broadcast around the world!
http://annrosen.se/
http://schhh.se/
http://syntjuntan.se/