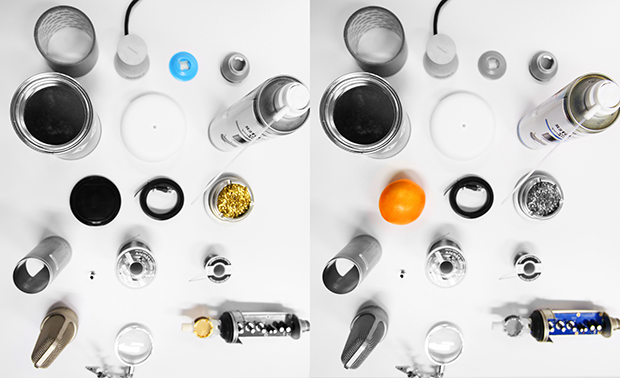 This is the first concert in a series of three by the experimental music collective Hertzbreakerz. This concert will present a blend of works in which the materiality of the tangible world is put into focus. On one hand, music in which the traditional instruments are used in a way that underlines their concrete nature as objects; on the other hand, compositions that musicalize objects. In both cases, amplification is used as a sort of sonic magnifying glass in order to highlight its most concrete nature. The physicality of sound, the research on resonance provided by the sounding boards of the instruments, especially in the pieces by Crumb and Scelsi, and the nude sound produced by amplified objects are in focus in this concert. The idea of working with “non-musical” objects is also a way of distancing ourselves from the history of classical instruments. The connotations that immediately appear when we hear the sound of a violin or a trumpet are now absent, and it’s possible that we perceive the pure compositional progress in a more sober, clear, maybe even in an objective way. In this way, we might even say that the perception approaches more directly the very origin, or the source of the sound.

The program of this concert will include Giacinto Scelsi’s “Ko-tha”, excerpts from Crumb’s “Makroksmos, vol. 1” for solo amplified piano and Michael Maierhof’s “Shopping 4”. The program has the aim to span from some of the historical milestones which moved the focus of composition to a particularly physical approach to sound, to works which imply amplification in order to let the audience experience a new perspective of listening on the timbre of the instruments. In fact, a piece by Alessandro Perini, “Steel String Quartet”, will make use of metal-wire custom built swings hanging from the ceiling, equipped with contact mics for amplification of the most subtle sounds. These sounds would be meaningless to the audience’s ears without amplification, but contact mics will make them audible. By stretching the strings, performers will also be able to modulate the pitch of the sounds.

In this second concert intangible realms will be evoked. The concert will focus on the duality between the concrete presence of a body (as a person or as an object) and the abstract essence of electronic sound; virtual networks and video-projected images as doors to another dimension. The program for this concert will include the virtual human presence in two different forms: two pieces from the well-know series “Voices and piano” by Ablinger present a virtual person under the shape of a voice, while the duality of the clarinetist and an interviewed condemned to death is the core concept of Jacob TV’s “Grab it”. We also found interesting to play the piece “Post-Præludium per Donau” by Luigi Nono in order to show how the environment created by the live electronics system starting from the tuba’s sound is really something different from other live-electronics approaches, where the processing of the sound still leaves quite a big space for the instrument itself. In Luigi Nono’s music the performer almost disappears, and all of his/her energy is transformed into soundscape. The piece is written for tuba and live electronics. On the other hand, Stockhausen’s “Solo” for flute and electronics is an example of a piece where the electronics create several virtual “doppelgangers” of the musician. A virtual polyphony between the physical performer (in this case a flutist, the score being written for any melodic instrument) will appear, taking advantage of the delayed feedback effect, once realized with analog tapeheads.      Apart from these classics, Francesco Del Nero will present a new work for ensemble, electronics and light. This piece represents a sort of journey into the mind of the author and in which the virtuality will have both the function of creating a soundscape around the audience and the function of a character, bringing it from a real world to the surreal world of dream.

This third concert will explore the function of the body in musical performance, with reference to the bodies of both performers and instruments. Experiments will be made with extreme situations of embodiment of technology into the sounding objects (instruments) or into the body of the performers.

“Mutations”, by Panayiotis Kokoras, asks for for clarinet with 3D-printed reed and tape. Here, the virtual means not only expands the original sound of the instrument but also modifies the instrument in its own construction: a sort of metaphor of the new 3D-printing possibilities which will soon let us substitute our dying organs with artificially manufactured body parts.

“Piece” for trombone and electronics by Danish composer Kaj Duncan David makes use of an augmented plunger mute which incorporates a speaker. This way, the plunger acts as a traditional filter for the trombone sound, but also as a sound source (at times filtered by the trombone’s bell).

“Perturbance” by Alessandro Perini, for double bass and embedded vibration speakers, tackles the traditional setup of solo instrument and electronics, making the double bass live a life of his own. The tape part and the gestures by the performer melt into one only sound, thanks to the incorporated device, with the instrument becoming a source of sound independently from the input of the performer.

Karlheinz Essl’s “exit*glue” makes a hybrid out of an electric guitar and a trombone. The performers are asked to use a trombone bell and a plastic tube to attach an artificial, analog limb to the output of the electric guitar. According to the composer, in this duet “both actors try to develop various strategies to approach each other in an attempt to fuse their specific sound worlds (GLUE), followed by situations where they try to break free, showing their idiosyncratic and individual abilities (EXIT)”.

A new work by Alessandro Perini, written for two singers, are based on a “voice” produced by small speakers inserted into the performers’ mouth and modulated by the singers’ lips. A sort of human vocoder which will turn the two opera divas into senseless and unexpressive robots.

A new work for two singers, double bass, guitar, piano and flute by Jonatan Sersam will make use of contact microphones and tactile speakers. This equipment will lead to a sort of augmented performer, able not only to produce sounds with his/her expanded limbs but also to enlarge the perception of what happens in the concert room thanks to his/her cybernetic ears/eyes. The idea is to amplify the vibrations coming from the heads, or the sculls of the singers, and to let those vibrations travel into the piano, more specifically to the strings. This way, we’ll have a new set of “vocal cords”, that can resonate in the piano. The vibrations picked up from the head are stronger when vocalizing with closed mouth. The result will not only expand the singers and the output they produce, but also the piano, which in this way becomes vocalized. The piece will be presented in the form of a set of short movements, based on texts by Danish author Inger Christensen.