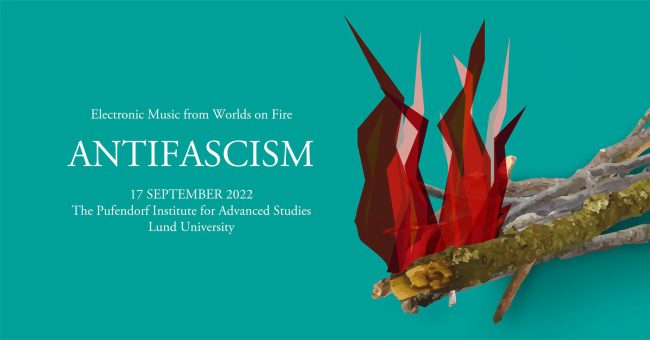 Throughout the 20th and 21st century many composers and sound artists address fascism, nazism, colonialism and disastrous wars in means that expands written and spoken words. Such affective expressions carry an ability to simultaneously express emotions and politics of high complexity. This concert presents such four pieces composed for quadrophonic loudspeaker system.

The concert begins in the war zone of current Europe, with the, for the occasion commissioned piece Rana [Wound] by Ukranian composer Alla Zagaykevych. Looking more than fifty years back, the concert then revisits two older pieces both from 1970 within the genre of political electronic music: First the Danish composer Else Marie Pade’s sound collage Face it [Se det i øjnene], reflecting the ongoing fascism after World War II. Then, Swedish Åke Hodell’s piece Mr. Smith in Rhodesia, which is a direct comment to British 1960s colonialism and apartheid in Zimbabwe.

The program ends with leaky boundaries [what are you | what are we], created by Swedish-Spanish composer Hara Alonso. The work draws inspiration from Hodell and invites the listener to join a club as a meeting place for dancing trans, queer, black and migrant bodies.

Hara Alonso (SE/E): leaky boundaries [what are you | what are we ](2022)
First premiere, commissioned by the Sound Environment Centre in collaboration with Konstmusiksystrar and Kulturrådet.

This concert is organised by The Sound Environment Centre in collaboration with Pufendorf IAS and IAC, funded by Kulturrådet and with friendly support by Konstmusiksystrar.