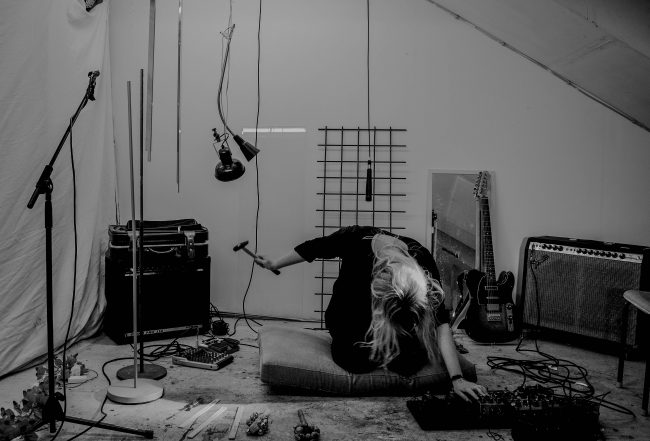 “Your action is required” is a conceptual residency by musician and sound artist Ess Beck. It is a reworking and new chapter in a self-investigation into method and praxis, based on her performance piece “24-hour woman” (24-hour improvisational sound and music performance, May 2017). With this conceptual residency, Ess Beck suspends questions on how contemporary politics influence artistic production, as well as the general public’s perception of the legitimacy and value of artistic production. This exploration is placed in the context of the process of creating continuous sonic output, as an attempt to understand process and how we value it in society. Finally, the residency manifests itself as a real-time example of how the abstract process is conceived, confined and converted in to concrete artefacts. This manifestation serves to question the purpose and meaning of the act of artistic process-to-product-conversion in certain contexts.
The residency and related methodology, seeks to explore the nature of productivity and process, versus the structural leanings of the neo-liberal “performance society”. It questions the continuous pressure to legitimate practice, and turn it in to something that can be produced, documented, evaluated and valued in a linear discourse. By pursuing to produce a continuous stream of performed sound during the residency, Ess Beck will use her presence and action in process, as a case against the idea that the synthesis between body, mind and action pertains to one singular discourse, which can be fully rationalized, explained and validated in any other system than what it is able to produce by itself.

By using her craft as a musician and sound artist, she anchors herself to historic time-space as an individual, while using the theatricality of the entire process and concept of “artist residency” to establish a simultaneous presence as a performer. Although she will be submerging herself in to an attempt to maximize creative volume, a part of her method is to deliberately respect biological restraints and creative exhaustion. This serves as a resistance to idea that the individual limitations of creative productivity, define concepts such as temporal “waste” and creative legitimacy; and also diffuses any concept of when the performer is. By doing so, the aesthetic and creative continuum that is pursued in a residency is paradoxically held up by the disruption of this very continuum.

The work will be streamed live during her residency, and recordings from each day will be condensed, reworked, released in a consumer friendly format post-residency.  Before, during and after the residency Ess Beck will also be blogging on her website about pre-liminal, liminal and post-liminal considerations and experiences.

Biography:
Stine “Ess” Beck is a MSc Audio Design graduate from Aarhus University’s Faculty of Arts and Communication (2016).
She has been active on the Danish and European Experimental underground music scene for the past 5 years and as a live VJ, before also entering the world of mixed media arts.

Combining her work as an experimental musician with multimedia and performance, she explores the cross-field between analogue and digital technology, examining how tools and technology shape creative processes and the subjective production of meaning in a theoretically “closed” semantic system. This work is done in continuation of her thesis studies in Audiovisual Culture and Audio-dramaturgical practice. This means that an academic scrutiny is vigorously applied in all aspects of her working process, with the ambition to understand the nature and role of sound and technology in relation to the theatrical event, narrative, process and Behavioural Economics.

In her cross-disciplinary work, there is an underlying theme of gender-identity, Cybernetics and Slow Technology that often works as a creative framework and catalysts for her critical works and action-discourse, regarding her process-defined methodology, which can essentially be characterized as form of “poetic actualism”. In most of her music and sound art production she operates in the field between musique concrète and conventional compositions, which she combines with a love for lo-fi, unintentional noise, mechanical systems, and excessive use of effects. Apart from her project-based work, she is currently using her findings from her process-oriented praxis to develop methods and didactics for open teaching programs to encourage young women to play/work with sound technology and experimental forms of sonic expression.