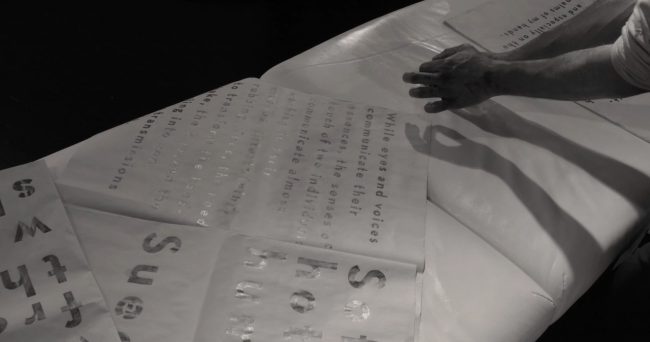 ‘The Tactilist’ is a video installation, departing from the 1921 Manifesto ‘Il Tattilismo’, written by fascist, futurist and poet F.T. Marinetti.

Considering Marinetti’s ambivalent subjects of intimacy, touch, violence and ‘the imaginable’ – Mariella Louise Otto uses the futurist ideology as an example of the endless possibilities and powers embedded in language and poetry, as well as a tool for exposing current tendencies within the socio-political.

In the video, masseur and spoken word artist Daniel Wade stages a treatment on an imaginary body while reciting fragments of the rather formal manifesto, containing an educational system of the haptic, as well as a series of abstract ‘categories of touch’. Conjoined with the video installation is a self-published printed matter, presenting the manifesto in its entirety, together with Otto’s own writings on ideals of purity, characteristics of ‘the healer’, literature and poetry as escapism and the therapeutic treatment as a submissive act – using references to Susan Sontag, Kathy Acker, Franco Berardi and Sara Ahamad.

To see the video work, make an appointment by contacting the artist via mariellaottosson@gmail.com.