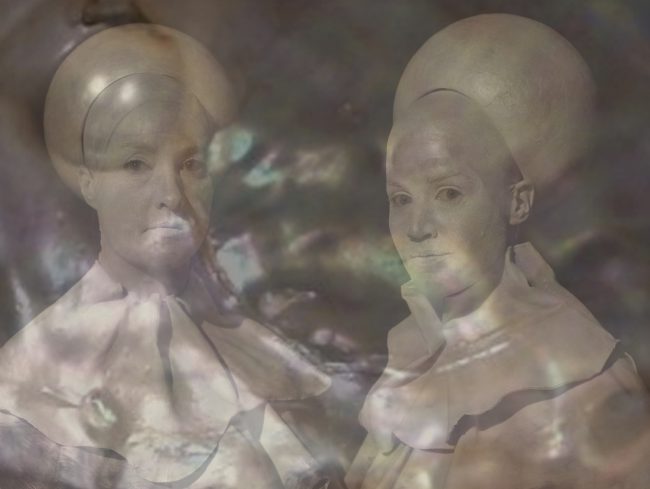 Welcome to the oyster ladies. They are stemming from a surreal world under water in a depth where the boundaries between humans and other living organisms dissolve. Transformed into other-worldly beings, inhabiting the oyster body, living in a symbiosis with the foreign body that comes into their shell, smearing layers upon layers of mother-of-pearl to make a little kin out of a foreign body. The duo Barbara & Marie-Louise makes ‘Mother of Pearl’.

‘Mother of Pearl’ is a concert performance in which the artists are performing in costumes which are abstract visualizations of oysters mirroring each other, just like two halves of an oyster shell. Their heads are covered with mother of pearl and crowned with a cut-out sphere – like a giant pearl.

By setting metal plates into motion with their hands, the plates function as musical instruments. A rhythmic interference occurs, as a result of playing rhythmic polyrhythms together.

At the Make Sound residency Barbara & Marie-Louise will expand the soundscape with a variety of plates in brass with different tones combined into a giant instrument. ‘Mother of Pearl’ invites the audience to draw attention to what may seem alien.

Through the work the artists investigate how the most precious can be created from disorder, as in the relationship between oyster and pearl, the unsolicited guest and the host; investigating how the potential can be found in the stranger and be fruitful and valuable as part of a system.

A mindset leaning against French philosopher Michel Serres, who in his work ‘Parasite’ talks about how the individual, through participation, resigns from himself and dissolves: A system where we are each other’s parasites, where the host cannot do without the guest.

’Mother of Pearl’ was shown in its initial form as ‘Under vand’ at Mayhem in September 2017. At Inter Arts Center Barbara and Marie-Louise will further develop the project’s scenography and acoustics by building an installation of light and big plates.

The artists perform the final result to the public at Malmö Gallery Night the 29th of September 2018, 20.00, Black Room.