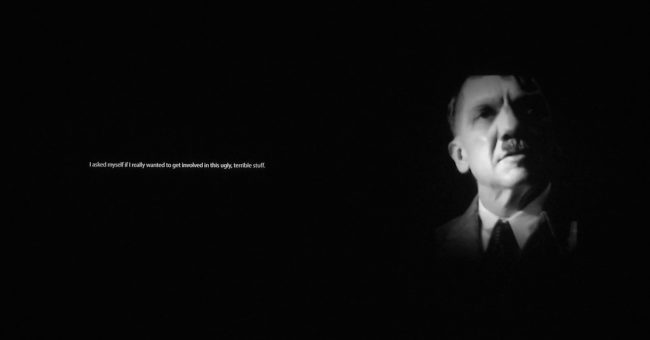 The work consists of two images projected next to each other. One side shows video images of actors playing Hitler, and the other, running parallell, displays texts showing their feelings regarding the role. They express an ambiguity around the subject matter, a curiosity mixed with feelings of horror, and sometimes, guilt.

Maria Norrman was born 1987 in Uddevalla, Sweden. She graduated from the masters program at Malmö Art Academy in 2013. Her work often take their starting point in fantasies, which often relate to how the body, clothing, and gender are used as a means of expression, and how history is used as a kind of tool for relating to one’s surroundings, or as a tool to repress it.

Norrman has recently exhibited at Galleri 21, Malmö and at the Pufendorf institute during Lund Culture Night. She received Aase and Richard Björklunds grant from Malmö Art Museum in 2015.