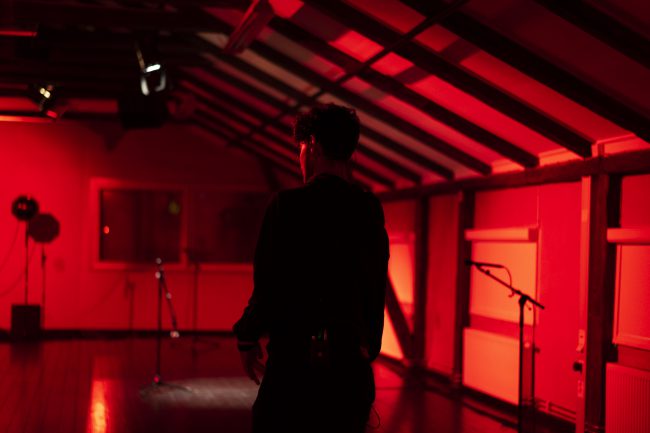 The ‘Red Room Project’ explores the displacement between a live performance and the echo thereof, in the performance ‘Red Room Institute’ and the sound installation ‘Use It Well’ (working titles). Inspired by the social phenomenon of ‘dancing epidemics’ in which groups of people were said to contaminate each other with compulsive dancing, the ‘Red Room Project’ investigates relations between audience, performers and the role of the directing voice.

A group of people who reacted to a casting call were, one by one, without meeting each other, invited into the ‘Red Room Institute’ at Inter Arts Center where they were guided through a performance, directed live through an in-ear system. Framed as something between a dance audition, a self-help radio show and a one-person audience experience in seven chapters, the performers were given directions and tasks that they could react to and interpret. With the information that they were alone in the room without the presence of a camera, the performers were encouraged to freely act, move and dance, thereby being asked to give us their echo, meaning that anything they did was recorded solely by the means of audio.

These echoes of ‘Red Room Institute’ build the foundation of the 16-channel sound installation ‘Use It Well’ in which the solo performers are brought together in the soundscape.

By leaving the visual space empty for the audience to fill in the blanks, Julie Nymann and Signe Raunkjær Holm investigate how the audio can provide a portal to the live performance. Is it possible to let the spectator feel as if the sound allows the absent bodies to be present with them – or feel as if their own body does the movements? Focusing on the body as an instrument of impulses, ‘Use It Well’ creates an immersive experience, in which the spectator is surrounded by a massive soundscape of bodies.