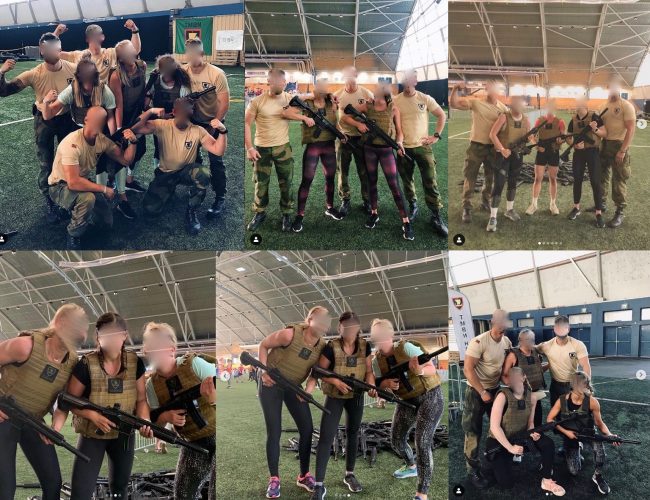 ‘Jihad Jane Bootcamp’ is a performative investigation into radicalization seen through the lens of self-orchestration and body worship. Laache will, during her week-long residency at the IAC, film and produce a series of videos in the style of follow-along exercise videos on youtube that over time become increasingly ardent and militaristic. The only changing factor in the videos is the address, which subtly, invisibly take on characteristics of zeal and fervor.

In this work, Laache explores the extremities of deference and devotion through a fictional fitness-influencer, Jihad Jane. The goal is for the character to be nearly identical to the numerous fitness influencers out there, but with a progressively ideological and zealous tint. The character featured in “Jihad Jane Bootcamp” is a young woman prone to inspirational messages about self-improvement with a heavy body image focus and thus the perfect victim of such campaigns.

‘Jihad Jane Bootcamp’ investigates radicalization as an invisible process of gradual, unnoticeable manipulation and increased conviction. The viewer will experience an unsettling, gradual shift in rhetoric, from supportive and affirming, to doggedly hostile and demanding. The project utilizes health and fitness as a cover operation for what seems to be an insidious and Machiavellian ideological takeover.

Laache has always been attracted to the idea that one can have allegiance to one’s own labor. In the physical execution of her work she often utilizes the idea of repetitive, laborious endeavors as a form of prayer and as a symbol of allegiance. This is previously explored in her durational performance “200 x 200 x 200”, a year-long daily exercise ritual.