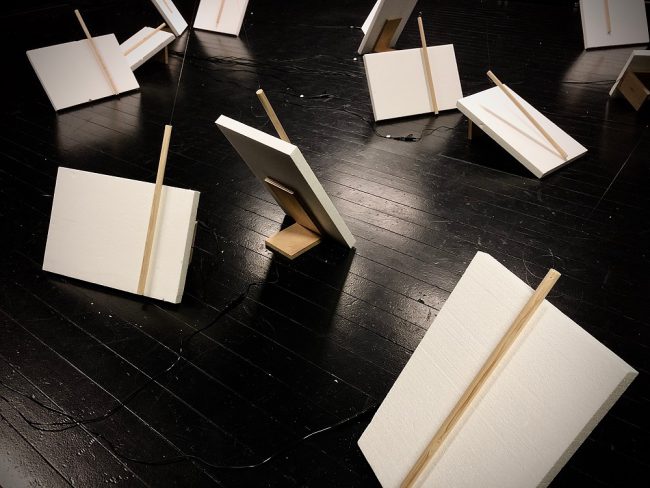 In the current sound-based work, a kinetic sound sculpture is creating acoustic sound through movement of its own material derived from motorized movements and disorganized movements originated in the acoustic material itself. It interacts with electronic sound in a live performance and the work is thus both an installation and a performance. The electronic soundscape is created from real-time samplings of the installation and spatialized through speakers placed around the room.

Inspired by artists such as Harry Bertoia, Max Eastley and Zimoun who capture the physicality of acoustic sound through moving objects and transform the objects from their original state, this project seeks to build on similar principles of materiality and visuality of sound. But the project also expands on these principles by integrating electronic composition and live performance, creating a soundscape that evolves over time. The installation is made up of several units that in general hold the same aesthetics and materiality, but each unit varies a bit in size, form and material, creating nuances both visually and auditorily. Together, the sound sculptures fill the room, moving in different sequences creating their own soundscapes. The audience can move freely around and in between the sculptures, exploring variations of the sounds and movements. During the performance, the acoustic soundscape interplays with warped echoes of electronic samplings, alternating focus between the two contrasting elements. Over time the samplings deform and deconstruct the original timbres.

The work is part of the Make Sound Residency, which will end with a public presentation on January 24, at 17-19, in the Black Room