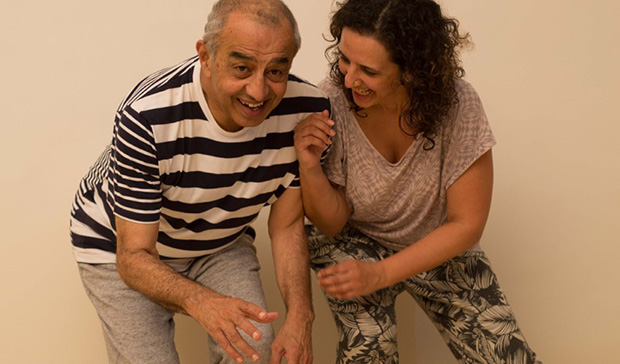 “An Evening with Astad” deals with ideas of dance history and archive between two continents. As dramaturg Kate Elswit puts it: “The (Rani/Astad) duet is a biographical dance. But it is not just thebiography of one of the two performers, Astad Deboo, as narrated in dialogue with the other Rani Nair; it is also a biography of contemporary Indian dance. The rehearsal process works through a combination of interview, movement, and reflection, to excavate and curate a series of possible scenarios, and the ultimate selection that is shared differs from night to night. What happens onstage is an intimate look at a spectacular performance artist—“I’ll let you in on a trade secret,” Astad promises—that at the same time offers glimpses of a much largerscale history that has yet to be written.”

Description of the research project

My last major performance titled Future Memory was based on my inheritance of Kurt Jooss’ solo made for the Swedish based Indian dancer Lilavati. It didn’t focus on the 1970s choreography but on the stories around it. It was a second order performance that used personal responsibilities of inheritance to move towards larger questions of history, memory, and legacy. This work with non Western archives was extended in a piece I created by invitation from curator Ong Keng Sen for the Singapore International Festival of Arts, using the archive of Japanese choreographer Chie Ito.

I have now begun to work on a new archive project with the legendary contemporary Indian choreographer Astad Deboo. There is not much of an archive of the pioneers of modern dance in India. Astad’s early choreographic experiments in the 70s featured solos with challenging topics such as insomnia, drug addictions and ritualistic performances with hot wax poured over his body. Many of them were collaborations with fine artists and architects who designed extravagant costumes and set designs for the shows. Although there were some photo shoots, there is actually very little documented. Not one of Astad’s earlier works have been fully filmed. And not many young dancers in India have actually seen his work. Most of them only know of him – as a phenomenon.

In the last couple of years we’ve seen quite a few performances in Europe which have a conversation with archive material, but very few actually bring in influences of people from other parts of the world or dances from outside of the European dance canon. Building on my previous project, Future Memory (2012/14),our work would like to extend the way we think about performing the archive specifically of non European artists. In Future Memory I explore notions of hybrid movement languages as this is featured in the original choreography, a meeting with Jooss and Lilavati, a meeting between different dance traditions. Lilavati spent a lot of time exploring ways to challenge expressions of traditional Indian dance and to work with contemporary expressions of contemporary indian dance. She did this in various solo performances and group works, but also in dance films and in collaboration with ballet dancers. This experimentation of a personal movement language and of hybrid dance form is something I find in Astad’s work. As well as his struggle to live up to, or rather challenge people’s perception of him, and the expectations of what Indian dance should look like. As when he was at Pina Bauch’s Wupperthal and had the feeling that they didn’t find him “Indian” enough. A major difference from Future Memory and this work, is that Astad Deboo is still alive! Next year he will turn 70 years old, and he will be up on stage in the performance.

Astad Deboo’s (1947) name is synonymous with Contemporary Indian Dance, a style that he pioneered at a time when innovations in Indian dance were not welcomed. Deboo’s work in the 1970s and 80s was not accepted by Indians who saw it as “too western” nor by westerners who judged it as “not Indian enough.” By the 1990s, audiences in India and beyond grew receptive to new Indian dance idioms partly influenced by globalization, internet and increased transnational travel. Deboo has received two prestigious awards from the Government of India: in 1995, the Creative Dance Award from the Government’s major Arts organization, Sangeet Natak Akademi, and in 2007, the Padma Shri recognizing him as a pioneer in Contemporary Indian Dance. Deboo’s dynamic dance career of over 40 years, with performances in over 60 countries, includes solo, group and collaborative choreography with performing artists. Deboo describes his style as “contemporary in vocabulary and traditional in restraints.” With a base in kathak studied with Guru Prahlad Das from a young age (later studying Kathakali with Guru E.K. Pannicker) Astad traveled to the US, Europe, Southeast Asia and Japan observing and learning different dance vocabularies. “My style has evolved from energetic and entertaining” remarks Astad, “to minimalist and introspective, from the narrative to the abstract.” His stunning signature style is characterized by intense focus, concentration and technical virtuosity along with a distinctively Indian aesthetic of evoking rasa (emotion). Deboo collaboratively created Rhythm Divine with Manipuri drummers, pung cholam. Similar to Deboo’s energy in providing a platform for Manipuri artists from India’s largely neglected Northeast, his humanistic social vision with the highest aesthetic standards inspires his creative choreography over the past twenty years with the deaf—first with The Action Players in Kolkata, then in Chennai with The Clarke School for the Deaf (ContraPosition). ContraPosition opened the International Deaf Olympics (Melbourne, Australia, 2005). Between 2005 2007 Contraposition had 75 shows across India, Southeast Asia, Europe and Australia.

As in Deboo’s work with the deaf, he challenges these youth to achieve Deboo’s signature meditative and minimalist style. He recognizes them as artists and builds their selfconfidence and group spirit through rigorous training. Deboo has presented them in various Indian cities.

Astad was mentored by Alison Chase of Pilobolus Dance Company for a number of years, and Pierre

Cardin commissioned a work where he was asked to choreograph a dance on the Bolshoi Ballerina Maia Plissetskaia, which was premiered in Paris at the Espace Cardin.

models for younger Indian artists whom he exhorts with characteristic clarity: “to be contemporary Indian dancers, we must be Indian contemporary”, not simply imitate the west. “Indian contemporary” idioms evolve from India’s rich expressive traditions along with openness to intercultural and crossdisciplinary interactions in today’s globalized world.

Rani Nair works as a choreographer and dancer with a special interest in postcolonial ideas and the body in social contexts. She has developed her own work in Morocco, Mexico, Vietnam, Iceland, and South Africa,among other places, many of them as part of the artistic trio WE Insist. She has performed at festivals including Spielart in Munich, ImPulsTanz in Vienna, the Ignite! Festival of Contemporary Dance in Delhi,Singapore International Festival of Arts, Avignon Festival, and the Gothenburg Dance and Theatre Festival. As a dancer she toured with Shobana Jeyasingh, Jayachandran Palazhy, Roger Sinha, and Julie Nioche. Nair is a dance advisor at Riksteatern, a national touring network in Sweden. She has been a collaborator with the network Sweet and Tender Collaborations, and on the editorial team of Ful, a queer feminist art collective who produced art magazines and made the antinationalistic cabaret Europa Europa about the inhuman migration politics of Europe, in collaboration with electronic duo The Knife