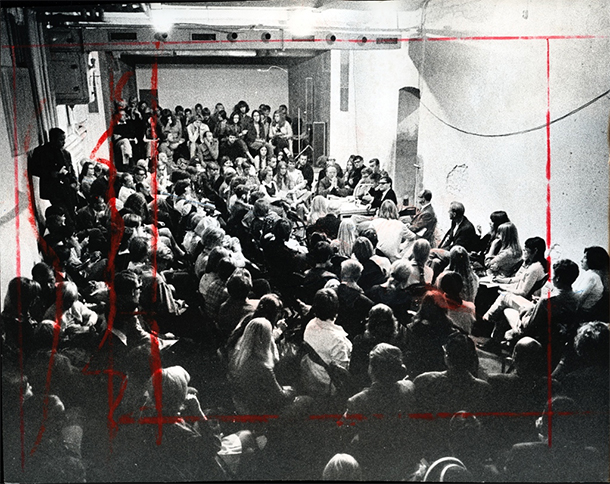 Wrap Your Troubles into Dreams is a practice-based artistic research project. The study investigates city transformation processes in the Stockholm area, by viewing them through two political attitudes expressed in the city; the introduction of the function-separated Stockholm City area (during the 1960s) and the privatisation of urban space during the last few decades. I have based my research on two sites that were created as reactions to their times: allaktivitetshuset Gamla Bro (1969-72) and the alternative caravan camp Kontoret (2007-2011) in Skärholmen.

In my research, I have chosen to focus my investigation on three circumstances: the relationships between the sites and the city transformation processes that took place in their times; questions of social marginalisation relating to its effects on people who are either disadvantaged themselves or exist among disadvantaged groups; and finally, the nature of these people’s experiences and their chosen ways of constructing their own structures as reactions to the political and economic realities of the times.

I have used two different methods in my research: conversation and archival research. In the conversations, in which I have interviewed people who lived at (or were strongly engaged in) the sites, a picture emerges of the transition from a welfare society to the entrepreneurial society we live in today. I have observed how these basic changes have influenced people, and how they can be detected in the urban spaces.

Wrap Your Troubles into Dreams focuses on personal narration and conversation as conveyors of knowledge. The conversations have been processed, transformed, and fused together into new narratives: a longer personal monologue in the film Kontoret: Skärholmen, 2010, and a polyphonous and ambiguous story in the film It was a Time When Everything was Possible – Power to the Imagination!. This modification of the material also serves to emphasize my own role as researcher/artist/film maker and narration/the narrator in the context of the documentary film genre as a truth bearer and construct.