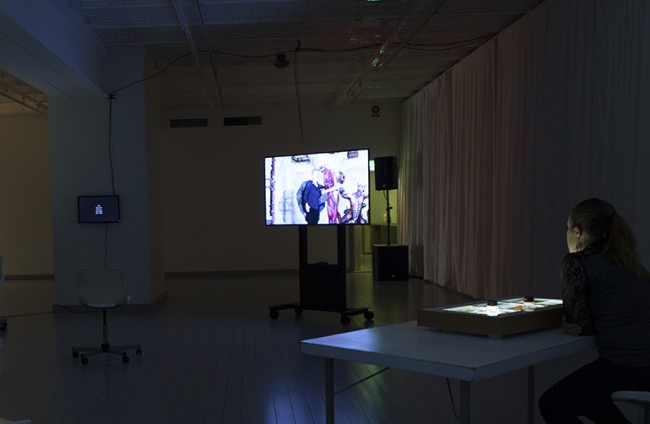 Steinar Haga Kristensen – The Loneliness of the Index Finger (Part II). An exhibition in connection with Soft City in Malmö.

For Soft City in Oslo, September 2014, Steinar Haga Kristensen staged the performance of his newly written opera The Loneliness of the Index Finger (Part II): “The Specialization of Sensibility in the Raw Conceptual State into Stabilized Theatrical Sensibility” (Consensus Image) in his artist’s studio situated at the top floor of Oslo City Hall. The opera was staged against the backdrop of a monumental scale fresco, also created by Kristensen, and the then still under creation fresco, together with the scaffolding necessary for its construction, constituted the main requisite for the play as well as the central object of consideration. The mural was later completed in May 2015, and the finished work given the title “Konsensusbilde” (Consensus Image) 2013-2015. At IAC Steinar Haga Kristensen will show a filmatization of the opera play, set in setting with tables, chairs and magnifying glasses to study fragments of the original fresco motives up close in a number of lightboxes.

The libretto of the opera revolves around the conflict between the artist (tenor), the power of the state (soprano), and the people (choir). An artist struggles to produce a monumental public work, a fresco on a giant scale that must reflect contemporary reality. As he attempts to find a form for the piece, the artist is hurt by the people’s contempt for monumentality, and pained by his own disdain for the transient. Caught between the demands of the State and the ridicule of the people, progress seems impossible. Slowly, however, an idea reveals itself. The work must be a self-portrait, narcissistic, fractured, triumphant; the truest expression of late-capitalist sensibility. The people are enraptured. With satirical grandiosity the picture is constructed from the artist’s own earlier works, a monumental staging of the premature historicism that characterizes the current condition.

Shortly after its completion, the fresco mural was encapsulated within the walls of the city hall, left as a monumental time capsule for future generations. Or hidden, as expressed by the protagonist in the opera play; “Away form all Index fingers, shall your picture rest“.

The exhibition and collaboration with Kunsthall Oslo is supported by Office of Contemporary Art Norway (OCA) and Nordic Culture Point.