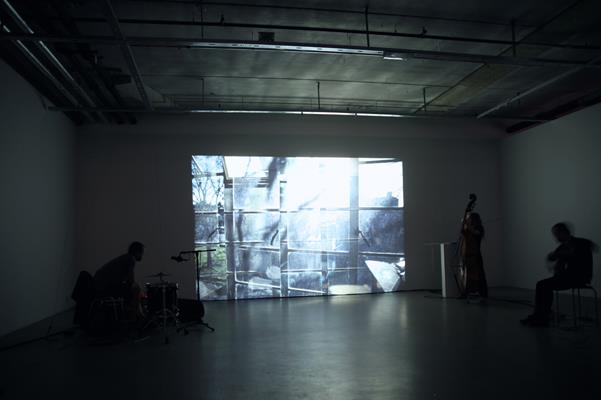 Skeleton is a live performance by sound artists and musicians Guro Moe, Håvard Skaset and live cinema artist Greg Pope. A darkened room – a cinema cave – a shelter and religion. Ghosts dance in the flame, images are cast and the wood splits. Sound waves and light waves radiate and refract. Skeleton comes to life; a shadow play, acoustic and amplified instruments, synthesized sound and the magic lantern. A dance macabre in four movements.

It will be performed in the Café at IAC, Friday 4 September at 8.30 pm, in connection with Soft City in Malmö, a performance programme in Collaboration with Kunsthal Oslo.

For the Skeleton performance by Guro Moe and Greg Pope at Kunsthall Oslo:

Working collaboratively and individually. Pope has made video installations, live art, film and slide works since 1996.

Composer, bassist and vocalist Guro Skumsnes Moe is among the most active musicians and composers in Norway within the borderless music. With a primitive and direct approach she seeks for a physical sound through bass and voice. To search for a sound that is not possible. The instrumental approach has elements of friction and noise, and draw inspiration from concrete music, field recordings, noise and performance.

The Norwegian guitarist Håvard Skaset has been transcending musical borders in countless collaborations spanning from noise, sound based impro to noise rock. A dedicated artist from the Norwegian experimental music scene, whose work is a mix between raw primal sounds and the use of instrumental skills rather than effects.