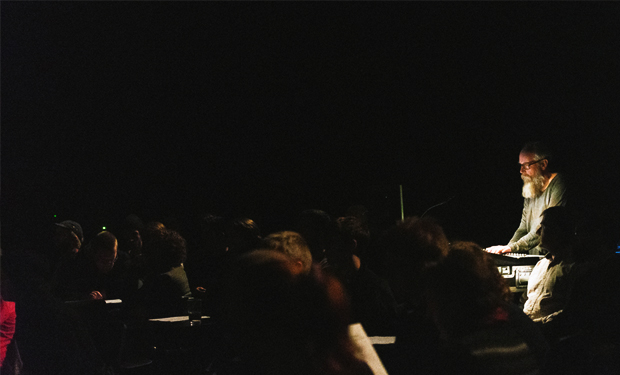 Acousmatic for the people – Two concerts at Intonal

Acousmatic for the people is an acousmatic festival as well as a network of artists. They present two concerts with works developed at Acousmatic Lab at IAC in January. The con-certs combine acousmatic music, live performance and sound diffusion through an acousmonium: a loudspeaker orchestra consisting of a large number of loudspeakers.

Acousmatic For The People 1

The first concert includes three new compositions. Katt Hernandez presents a piece in con-templation of the ephemeral remains of the former and future possible urban landscapes of Stockholm. Plane-Z’s by Jørgen Teller is a composition for synth, vibraphone, live violin and samples. Into the White by Jakob Riis is a composition of microtonal timbres for fixed media and đàn tranh played by Nguyễn Thanh Thủy.

Acousmatic For The People 2

Alessandro Perini presents the first electroacoustic pieces in a series of studies where the focus is on sounds recorded with contact microphones. Bredvid A is a composition by Ann Rosén performed on the Kneecuff instrument with live sound diffusion. Tandem Musca Cacavit by Sten Olof Hellström is about impossible sounds, uncontrollable currents and sinis-ter undertones.

For the third consecutive year, Inkonst and Inter Arts Center present Intonal festival in partner-ship with CTM and Unsound. As ever, Intonal celebrates musical expressions off the beaten track – from exciting journeys into sound to experimental club music and energetic live perfor-mances. Artist talks, screenings and video and sound installations are integrated even deeper into the festival program.